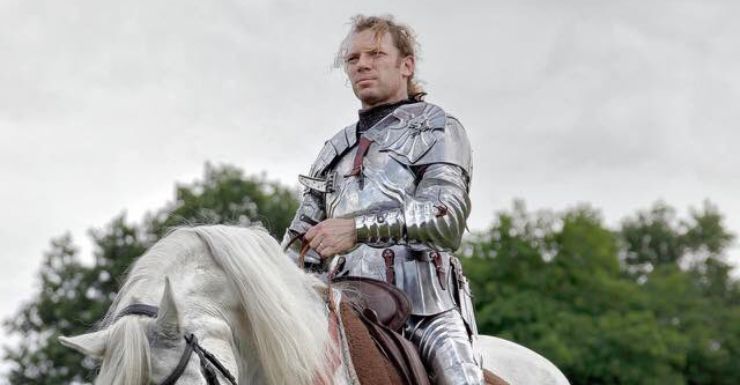 Mr Leitch is employed as a full time jouster at the tourist attraction, among five other part time jousters who perform in the castle’s famed battle arena.

He also lives with his family at the castle.

Jousting involves two competitors on horses riding toward each in an attempt to break their opponent’s lance.

The Australian won the overall title in France not only by jousting, but also by excelling in foot combat, mounted melee and “skill at arms”.

“I’m always surprised when I win,” he told Fairfax Media on Tuesday.

“But when it was all over and I saw my flag flying over a castle in France I was quite overwhelmed with emotion.

“Basically you try not to get stabbed

“You try to let the armour take it but you do get hit a lot.”

Mr Leitch said he used a combination of weapons that were mostly real, while some were made from rubber.

He said he prepared by training with the Australian Historical Medieval Battles team.

“They fight pretty rough so fighting with them definitely helped me quite a bit,” he told Fairfax.

The full time jouster loves his job so much that he has been closely studying medieval practices for the past seven years.

He wears a massive 35kg of custom-made shiny armour when he suits up for battle and for his job at Kryal Castle. He said it takes 30 minutes to put on.

Kryal Castle was opened to the public in 1974 and has been a tourist attraction in the city of Ballarat, west of Melbourne, ever since.

‘My whole day is jousting’

Business manager Serena Eldrdge told Fairfax Media that the team at Kryal Castle were delighted with the result.

“It’s a full-on competition so it’s a huge achievement,” Ms Eldrdge said. “We’re all really proud of him.”

The tournament’s Facebook page showed a scene of “devour and festoyment in the room of the parliament of the castle,” yesterday, for the “Banquet of the Tournament”.

Mr Leitch said his wife and 14-year-old daughter accompanied him on the trip.

He said having them there helped him win the title.

The tournament was held just outside the town of Bourg, which is in France’s western region, south west of Paris.

In a video posted to Vimeo, he said: “My whole day is somewhat related to jousting”.

This included looking after and tending to his horses: “You never learn enough about riding a horse. Jousting is a team sport … it is between you and your horse.”