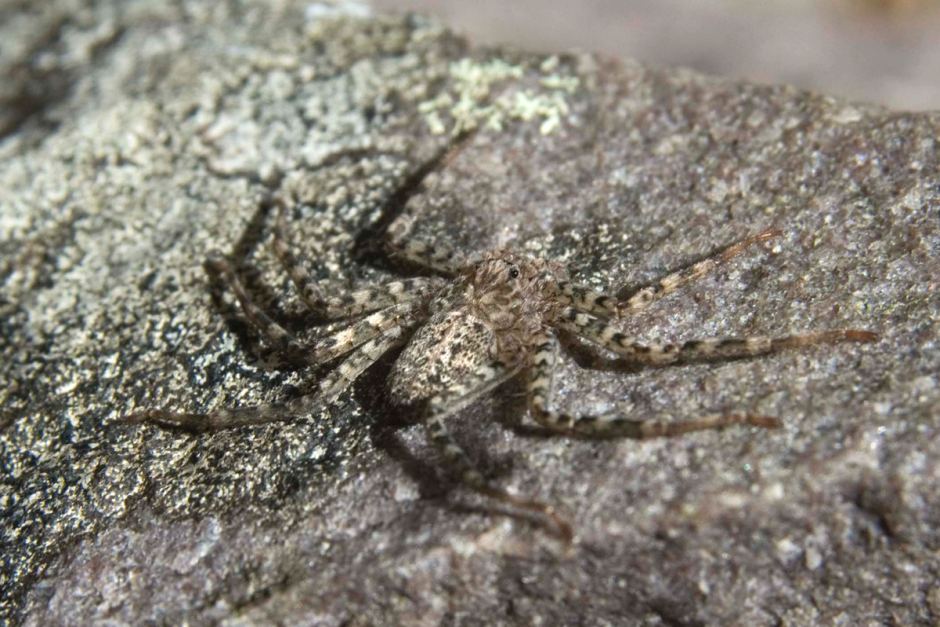 Australia is well known for its exotic wildlife, but a visiting researcher believes it could also be home to the world’s fastest-lunging predator.

Karaops are a type of small, flat spider found only in Australia.

Californian researcher Sarah Crews has spent 60 days trekking through central and northern Australia, collecting as many samples as possible.

“Sort of accidentally we noticed that they are very fast at striking their prey, and it may be that they are the fastest terrestrial ambush predator on Earth.”

It has been a gruelling journey for the 38-year-old, who studies arachnids at the California Academy of Sciences in San Francisco.

She and a research assistant have criss-crossed northern WA and the Northern Territory in a mud-spattered four-wheel drive, visiting remote rocky locations for what she calls “flipping rocks”.

“You drive every day, drive into the night, set up camp and go to sleep and you do it again,” she said.

“Sometimes we can’t find the locality where specimens have been found before, because the information was poor, and a lot of times we can’t get to the site due to mining, so that makes it difficult.”

Over 100 specimens destined for the US

But Dr Crews’ efforts have paid off and she now has more than 100 samples in test tubes in a suitcase ready to take back to the Unites States.

Back in the laboratory the spiders will be filmed lunging at their prey, which is usually live crickets.

By watching the footage in slow motion, Dr Crews and her team will be able to get an idea of the spiders’ mechanics, and how they are able to lunge at prey in a fraction of a second.

“So we’re trying to work out the mechanism behind how they can move so fast, whether it’s hydraulic pressure coupled with muscles, or whether there’s some sort of trigger for a huge release of energy. We’re just not really sure yet.”

Thousands of spiders still to be identified

In 2009, Dr Crews spent a year based at the Museum of Western Australian, describing hundreds of previously unrecognised spider species.

The museum’s head of terrestrial zoology Dr Mark Harvey said he would be interested to see the results of Dr Crews’ work.

“I would love it if in my lifetime we could understand every single spider species in Western Australia,” he said.

“It’s probably not going to happen, but being able to get assistance from people like Dr Crews is invaluable in understanding the diversity and the biology and ecology of Western Australian spiders.

“The detailed work that she is doing is sort of an international standard.”

So far there are more than 1000 spider species recorded in WA and 3000 nationally, but it is believed there may be as many as 10,000 more still to be identified.