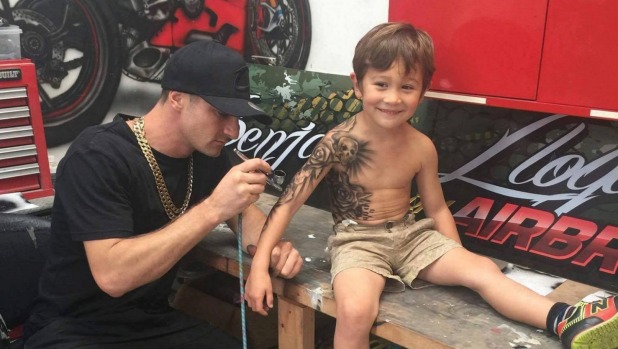 Benjamin Lloyd, a tattoo artist from Tauranga, got the unusual idea of inking temporary tattoos for kids when he was young drawing on himself, Fairfax Media reported.

The 25-year-old posted his concept on Facebook alongside the caption “50 likes and I’ll go to Starship Hospital and tat (sic) all the kids up.”

And Mr Lloyd will keep his word, saying he hopes the artwork can boost the ill kids’ confidence while in hospital.

“The kids are so amazed. As soon as they get the tattoo it boosts their confidence,” Mr Lloyd said.

“The only bad thing is that they don’t want to take a shower afterwards.”

It takes about eight minutes to design and produce the tattoos using stencils and spraying freehand, which washes off in the shower.

He has airbrushed tattoo designs on a handful of children over the past two years.

Currently, the post has almost 500,000 likes, and Mr Lloyd said he was overwhelmed by the positive response.

“I checked it (my phone) this morning and was just like ‘Wow’. I started crying I couldn’t believe it,” he said.

Since then he has started his own airbrushing company, with the motto “you say it, I’ll spray it”.

He plans to visit the Starship Hospital later this week.

Watch the artist in action here:

Body found in Vic creek, amid further flood warnings
‘Horrific’: Mother to be charged over motorway stabbing
Meghan and Harry set return date – but family plans are up in air
Australia’s Cambage takes break from WNBA
Iran denies attack on Salman Rushdie
Giuliani targeted in election criminal probe
What the shape of a dog’s head reveals about its personality
Today's Stories

Tattoos for kids – that’s a thing … in NZ