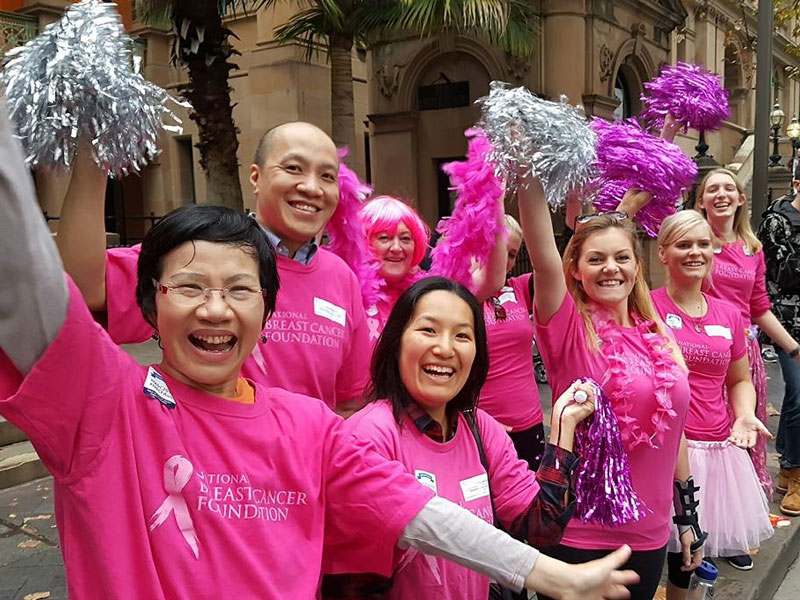 Tens of thousands of breast cancer survivors, fighters and supporters have taken part in Australia’s biggest fundraiser to fight the disease.

The Women in Super Mother’s Day Classic was held in more than 100 metropolitan and regional locations across the nation on Sunday morning.

The official figure raised for breast cancer research was yet to be released, but organisers set a target of $4 million – in excess of 2015’s haul of $3.1 million.

In many locations cold, wet weather met participants running or walking either four or eight kilometres.

Almost 30,000 Victorians took part, while about 10,000 took part in Brisbane. More than 4000 ran around Canberra’s Lake Burly Griffin, which registered about 22mm of rain by 9pm on Sunday.

Maxine Cooper was diagnosed with breast cancer in January and watched her children and grandchildren complete the event in Wollongong.

“I’m so proud of them all. It’s just beautiful, I can’t stop crying,” she told the Illawarra Mercury.

“The support I’ve had from my whole family since being diagnosed has been absolutely marvellous.

“My daughter organised for the family to come down today. It means so much to me.”

For many of the participants, cancer had touched their family in some way.

Breast cancer is the most common to be diagnosed in Australian women and one in eight women would develop the disease in their lifetime.

The good news is that survival rates improved dramatically in the past 18 years, with 89 per cent now surviving.

Former AFL star and Sydney Swans legend Jude Bolton ran 8km in Melbourne as an ambassador for the Walk With Us campaign.

“Breast cancer is one of the most common cancers Australian women and their families face,” he said.

“So it’s important for us to do what we can to make a difference. Having two young daughters I’d like to see a cure for breast cancer discovered in their lifetime.”

The event raised more than $27 million for research by the National Breast Cancer Foundation since 1998. Donations could be made until May 16.

See more of the event below And congratulations to the winner of our Mother’s Day Classic competition: Jennifer Grossi.