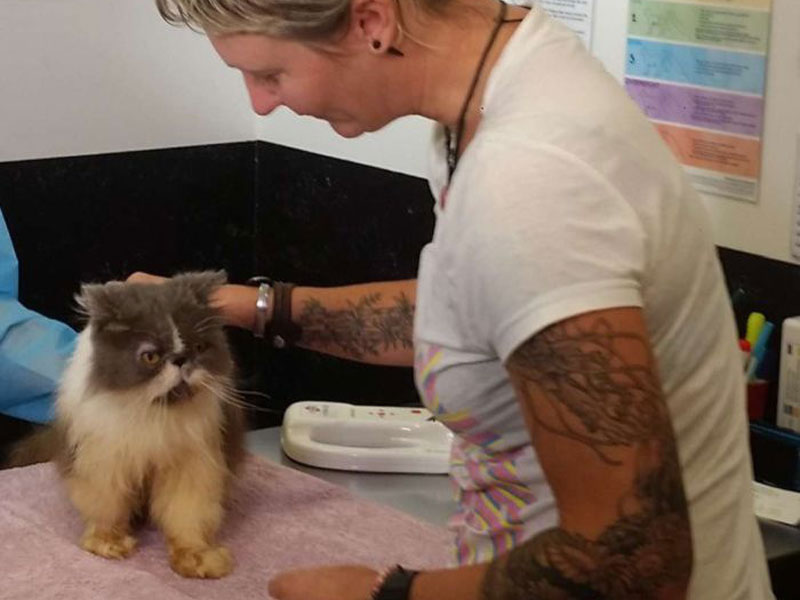 A cat owner says she is overjoyed to be reunited with her beloved Persian, Ralph, who went missing five years ago.

Ms Handcock says she had spent months looking for her cat.

“Five years ago we door-knocked, letter-boxed and called shelters,” she said.

“The whole neighbourhood knew him and we figured someone must have taken him.”

She says she was confused and lost for words when she received a call from the RSPCA at her new home in Grenfell, in central-west New South Wales earlier this week to tell her Ralph had been found.

“I felt sheer excitement,” she said.

She immediately drove to Melbourne and was reunited with her cat at the RSPCA’s East Burwood centre.

She believes Ralph remembered her.

“As soon as he saw me, he put his paws up on my chest and he started purring his little head off,” she said.

Ralph was found at a North Melbourne address and the RSPCA used a hand-held scanner to read the cat’s microchip.

They were able to track Ms Handcock down via the contact details linked to the microchip’s ID number.

RSPCA Victoria CEO Dr Liz Walker says microchipping cats gave owners the best chance of being reunited with their pet if is lost or stolen.

“A heartwarming story such as this one wonderfully illustrates the importance of ensuring your pet is microchipped and that owner details are up-to-date, both with the register and your local council,” she said.

Dr Walker says as a goodwill gesture, the City of Melbourne has waived its pet reclaim fees for Ralph.

It is not clear where Ralph spent the past five years, but Ms Handcock does not believe he was well looked after.

“He was skinny and mangy with dirty fur and long claws,” she said.

Ms Handcock says she is now looking forward to giving Ralph plenty of tender loving care in the coming months.