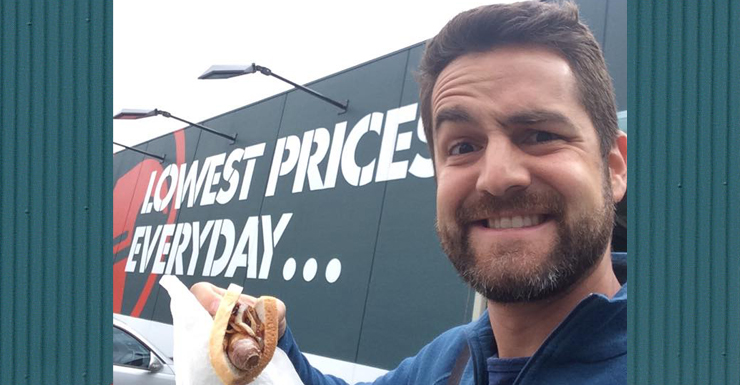 A South American comedian who only recently moved to Australia has roasted our love of barbecued snags as only an outsider could.

Ivan Aristeguieta drew roars of laughter during a stand-up routine at Melbourne’s Comedy Festival by dressing down the humble sausage.

The Venezuelan, who moved to Australia in 2012, said he is learning to become a true-blue Aussie by attending the famous sausage sizzles at Bunnings hardware stores.

“I already feel I am becoming Australian because I’m relating to food in a more Australian way,” he told the audience. “As soon as I smelled the sausage sizzle, I was like, “Oh my god, sausage sizzle! **** yeah!”

But it wasn’t always that way. Years earlier, when Aristeguieta was new to our ways, the smell deeply concerned him.

“The first time I smelled a sausage sizzle I was like, “Oh my god, there’s someone burning inside a car!

All that’s changed. He said buying a sausage in bread now gives him the joy of getting rid of unwanted loose change: “When you go to a sausage sizzle, you give them your coins and you get a sausage FREE. It’s amazing.”

The jokes clearly struck a chord. A video of the routine uploaded to his Facebook page on March 22 had been viewed almost 700,000 times, shared more than 12,000 times and commented on more than 5000 times as of Monday night. Most commenters were tagging their friends to watch as well.

The South American comic said he is now a Bunnings cook-up regular. And it’s clear he has learnt the key to the Aussie cooking technique: it’s all about the snag.

“You don’t care about the onions. You just burn them … If you burn them, they will come.

“You don’t care about the bread. You bulk buy bread. Cheap bread, the cheapest you can kind. White bread, not even fibre.”

But there is one thing that still puzzles him: our fascination with serving our well-done sausages in square loaf bread when there’s a perfectly acceptable alternative.

“It’s a square bread for a long sausage. This is Australia. I know you know there is a thing called ‘hot dog bun’.”

The uploaded video received rave reviews. “When he said ‘hot dog bun’, I lost it hahaha,” said one commenter. Another posted a photo of a Bunnings sizzle in Alice Springs with the caption: “Onion’s are burning!”

Aristeguieta joined in, thanking those who shared the video.

“Hola amigos! Thank you so much for sharing my clip. It means so much to be accepted by Australia,” he posted.

The Melbourne Comedy Festival is a four-week event that has been held annually in March and April since 1987. It attracts hundreds of local and international comics and other artists.