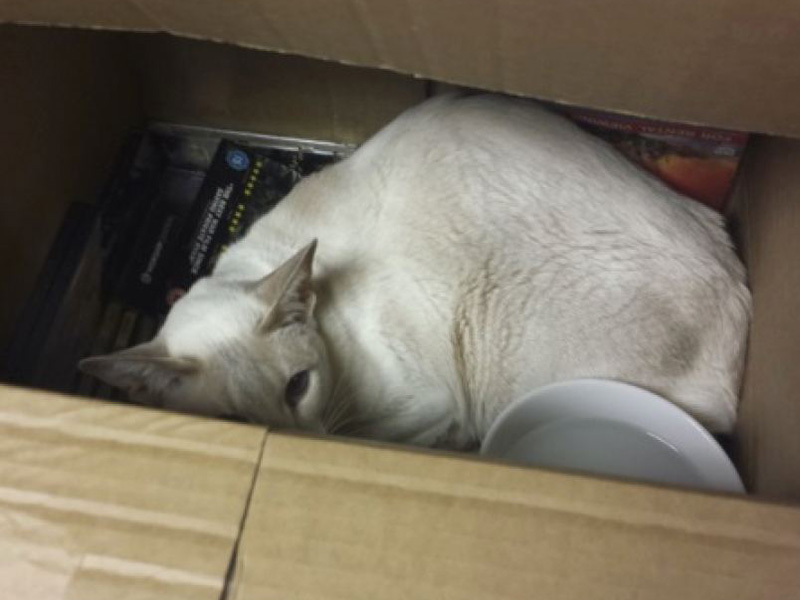 A Siamese pet cat named Cupcake has been reunited with her owner after surviving an eight-day, 400-kilometre journey through the post in a sealed cardboard box.

Two weeks ago, while her owners were packaging up some DVDs to send through the post, Cupcake hopped into cardboard box they were to be sent in.

Her owners – who live in the town of Falmouth in Cornwall, England – sealed and sent the parcel without realising Cupcake was tucked up inside.

Eight days later, when the package arrived more than 400 kilometres away in West Sussex, the recipients were stunned to open the box and find Cupcake inside.

Ziffit Towers, where Cupcake was delivered, wrote on their website that she had arrived “in a sorry state” and was quickly whisked off to a local vet.

‘I don’t know how she managed to get in there’

Ben Colwell from Grove Lodge Vets said Cupcake was recovering well after several days of intensive treatment, despite being “quite dehydrated and obviously really quite scared, quite nervous” when she was found.

Ms Baggott, who travelled to West Sussex for a tearful reunion with her cat, said she felt terrible about what had happened.

“When I realised she was missing two weeks ago it was the most horrible, scary feeling,” she told the BBC.

“We looked everywhere for her … I put everything in the box and sealed it straight away so I don’t know how she managed to get in there.

“It was a miracle because she was alive and she’s managed to survive that awful ordeal.”

Cats are able to survive several days without food, and are more tolerant of dehydration over short periods than many other animals, especially if the cat is young and healthy. ‘Miracle’ cat sent on eight-day journey through the post