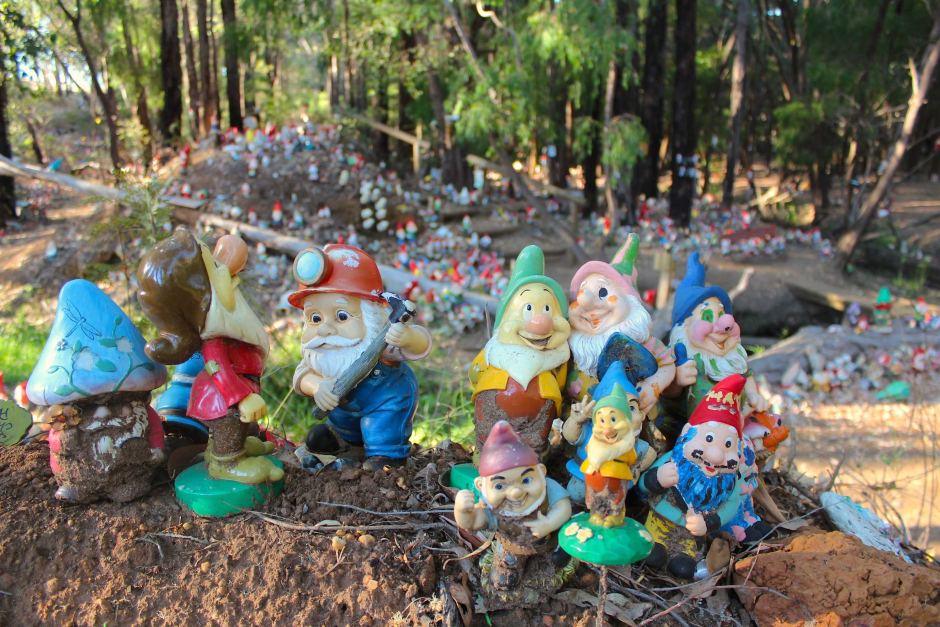 A community in Western Australia’s South West is facing an unusual problem with its flagship tourist attraction – it has become too popular.

Gnomesville – a quirky clay village near Dardanup – has grown so quickly it is threatening the privacy of nearby residents.

Legend has it Gnomesville began in the 1990s after a local resident placed a single garden gnome in the hollow of a tree.

Since then thousands of gnomes have been placed in the area by locals and tourists.

“When you’re on the road a lot as we are, you see trees with boots or shirts hanging off them or termite mounds that are all dressed up, but I’ve never seen a collection like this of gnomes.”

However, many of the gnomes sit on private property bounded by a thin rural fence line that has been largely destroyed.

Local resident Donalie Haynes has created a tongue-in-cheek asylum detention centre for displaced gnomes, but agreed the situation was getting out of hand.

“It’s a nice way of saying ‘this is private property’ and if your gnomes are going to be on this side of the fence they will end up in the detention centre,” she said.

“But I can’t keep up any more because there are so many people coming to visit Gnomesville with their gnomes.”

Ms Haynes said her children had been abused while moving gnomes back on the correct side of the fence.

“I want to be able to use it as anyone else would use their backyard and I can’t at the moment, we have no privacy.

“If my kids move gnomes they get yelled at which is a bit distressing for them.

“I want them to feel safe down here and they don’t feel safe.”

Ms Haynes said millions of footprints had compacted the earth and caused significant environmental damage to a large part of her eight-acre property.

“Because the original fence has been broken there is no boundary that’s been set so people can just keep the gnomes going and going and going,” she said.

“Myself and my neighbours want to revegetate to get this area back up to how it should be and it’s impossible to do that when there is people walking through constantly.

“I have concerns about security but also people injuring themselves and who is liable for that?”

Search for a long-term solution

The local council has committed to building a barrier fence, but cannot say when.

Dardanup shire president Mick Bennett said it was a big job that would involve the relocation of thousands of gnomes.

Mr Bennett said he would like to see a creative approach to the fence construction.

“Maybe we can have it as a type of gnome wall or something where people can put their gnomes on the wall and make it look a little bit more special and a little different so it adds to the quirkiness to the place,” he said.

But for the time being, he said Gnomesville would be here to stay.

Gnomesville becomes a victim of its own success