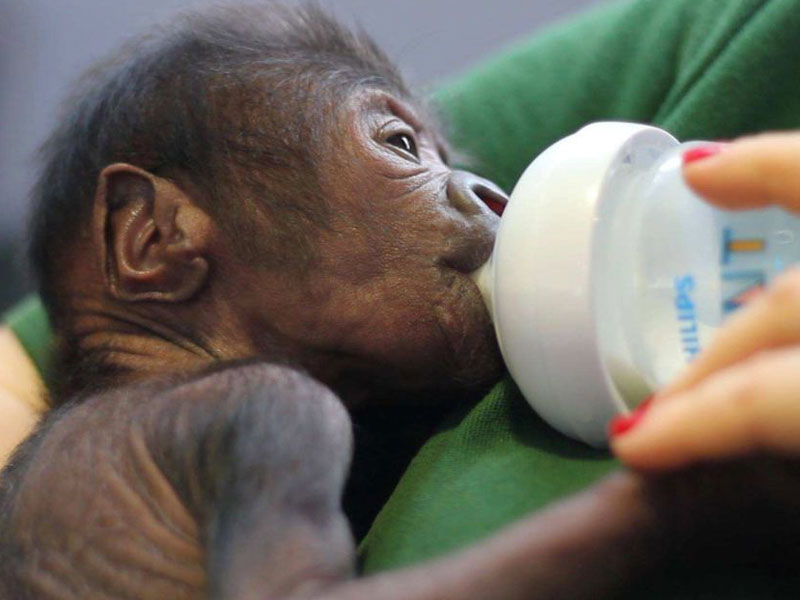 A maternity doctor has delivered a baby of a different kind – a gorilla – by a rare emergency caesarean at a British zoo.

The now-11-day-old baby, yet to be named, is one of only a handful of gorillas born by caesarean worldwide.

“The birth of a baby gorilla by caesarean section is even more unusual,” senior curator of animals John Partridge said.

“It wasn’t a decision we took lightly – Kera was becoming quite poorly and we needed to act fast.”

Professor Cahill, also a professor in reproductive medicine and medical education at the University of Bristol, has performed hundreds of caesareans on humans, but Kera’s was his first on a gorilla.

“It was very special, very different,” he said.

“I’ve held lots of babies, but this one was quite special, because even though it was quite small, it was doing all the things you expect a gorilla to do including hold onto you.

“It had a strong grip and looked at me with those weird eyes it’s got.”

Weighing just a kilogram, the baby gorilla needed emergency resuscitation immediately after birth, including mouth-to-mouth from a vet.

But mother and baby are now doing well.

“It’s still quite small, but it’s out of danger, I think, in any sense.

“When I held it, it had a nice nappy on, so I was quite safe to hold it for long periods of time.”

The gorilla has started “skin-to-skin” contact – a process used for newborn babies – and will be hand-reared by a small team of gorilla keepers.