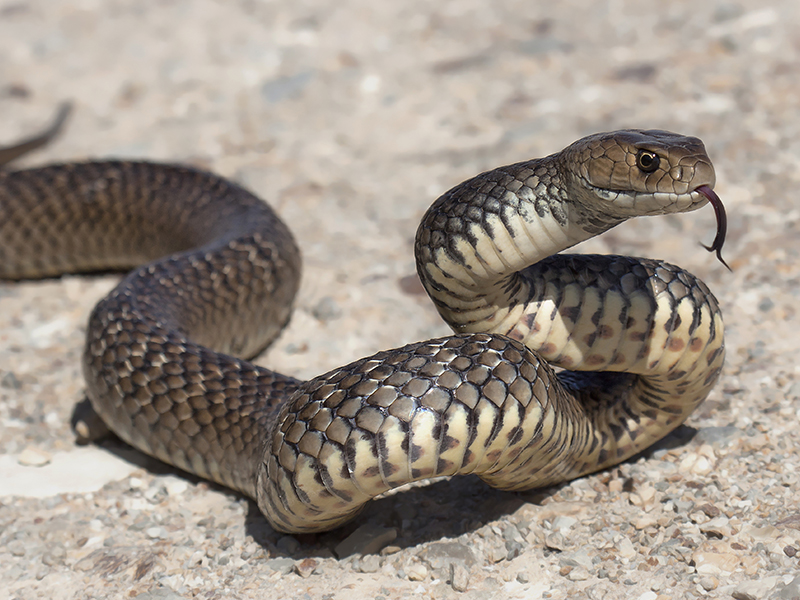 Our deadly snakes are not living up to the hype. Photo: Getty

A Riverina farmer has captured what appears to be nature’s version of a David and Goliath battle.

The photo, taken over the weekend, shows a daddy long-legs spider stringing up its prey – a lethal brown snake.

Farmer and photographer Patrick Lees said it was the first time he had seen a spider kill a snake.

The farmer found the snake on his property at Weethalle, near West Wyalong in central west New South Wales, on Saturday.

The snake was a juvenile about one metre long.

Mr Lees has left it in the web, where a group of spiders has begun spinning a web over the snake’s face and tail.

“I’m not going to deny them their victory,” he said.

Spider for the win

The Australian Museum’s arachnology collections manager Graham Milledge said while it was not clear exactly how the snake had died, it was quite possible the spider was responsible.

“The most likely scenario is that the snake got entangled in the spider’s web. Usually what happens then is the spider will try to wrap the snake and then they’ll bite it,” Mr Milledge said.

The Australian Museum lists the daddy long-legs spider as carnivorous and predatory. The venom is not particularly potent, despite rumours it is one of the world’s most poisonous.

“There have been observations where daddy-long-legs spiders have caught redbacks in their web, and I guess that’s where the myth might have originated from – that if it can kill a redback, it must be more poisonous, but that’s not the case.”

Mr Lees’ photo has prompted other local farmers to share their photos, including one from Lauren Donaldson of West Wyalong, depicting a redback spider wrapping up a field mouse.

Spider vs snake: the David and Goliath battle