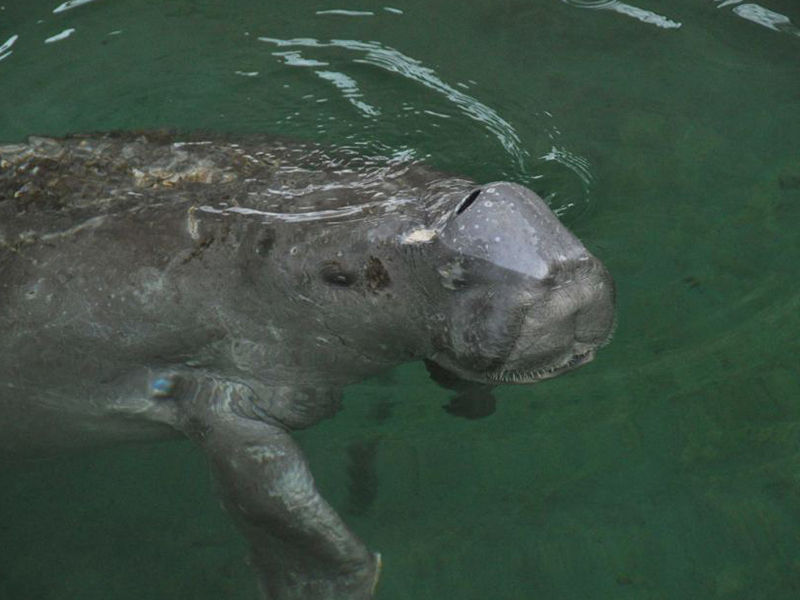 A dugong has been relocated to Brisbane’s Moreton Bay after being found living in cool waters off the southern coast of New South Wales.

The 2.7-metre dugong named Merimbula – after the town where it was found – was taken by boat from Sea World on the Gold Coast on Thursday morning and released off Brisbane.

Sea World director of marine science Trevor Long said it was a rewarding release given the vulnerable status of the species.

It is thought Merimbula travelled south on ocean currents and would not have survived.

There is an established population of about 1000 dugongs in Moreton Bay and Mr Long is confident the male has a strong chance of survival in Queensland’s subtropical waters.

“After two weeks of rehabilitation in our vet centre, Merimbula’s health and skin condition improved and he was ready to be released,” he said.

Capturing the 340-kilogram mammal in Merimbula Lake and then transporting it interstate involved a coordinated response from a large number of stakeholders.

They included the New South Wales National Parks and Wildlife Service, Sea World, Sydney Aquarium, and the Royal Australian Air Force, who flew the animal to the Gold Coast.

The dugong was first sighted in the saltwater lake three months ago and marine experts feared cooling temperatures and a lack of food would eventually prove fatal.

Queensland Environment Minister Steven Miles said the dugong was tested for a range of contagious diseases. All tests came back negative.

“Prior to the release, Merimbula was fitted with a neutrally buoyant satellite transmitter to track his movements,” Dr Miles said.

“We are confident the transmitter will provide valuable information on his movements after his release.”