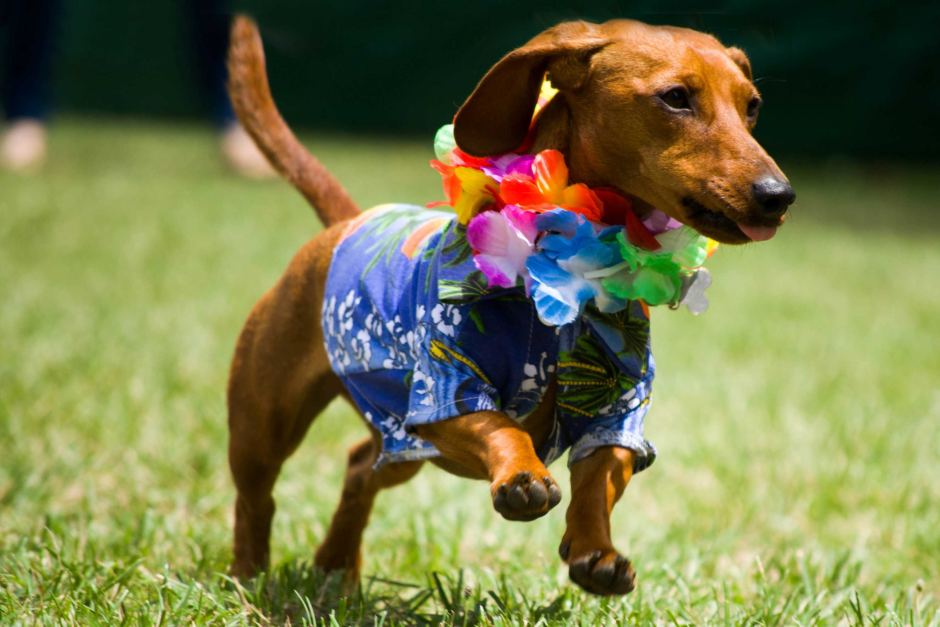 Hundreds of sausage dogs in fancy dress have delighted crowds at this year’s Bungendore Show as part of the inaugural Werriwa Weiner Dash.

And while it may be a first for the rural town in New South Wales, organiser Mark Ellis said the wiener dash was a phenomenon gaining popularity around the globe – particularly in America.

“I thought, well, this is probably something that would be good in Bungendore,” he said.

• Woman woken by exotic animal caressing her face
• Giant, invisible gas cloud heading for Milky Way
• The 15 gadgets that will improve your life in 2016

“I went to the show society and said ‘would you be interested?’ … And they said yes.”

Organised as a fundraiser for the Dachshund Rescue Australia, the event also included a “dapper dachshund” fancy dress competition, which attracted a variety of comic entries.

The winner was a sausage dog dressed as a clown, complete with a wig and a fake nose.

But there were a multitude of other characters on show, from lifesavers to ballerinas and everything in between.

‘We lured him to the other end with some treats’

Julia Bradshaw from Canberra entered her 18-month-old dachshund Henry in both the races and the costume parade.

While Henry’s hot dog outfit was not enough to win him a prize, he did manage to take second place in his racing heat, with little to no training.

“We lured him to the other end with some treats.”

The grand final race was taken out by a dachshund called Peanut.

Mr Ellis said a total of 127 sausage dogs attended the dash – but that the crowd of humans the event attracted was even more impressive.

“For each race we had a huge crowd coming along to watch,” he said.

The sausage dog event was not the only drawcard card at this year’s show, but show officials agreed the wieners were a winner with the crowd.

Show president Marion Whalan said people came from as far as Sydney, Wollongong and the south coast to attend the wiener dash.

“They are really amazing little dogs,” she said.