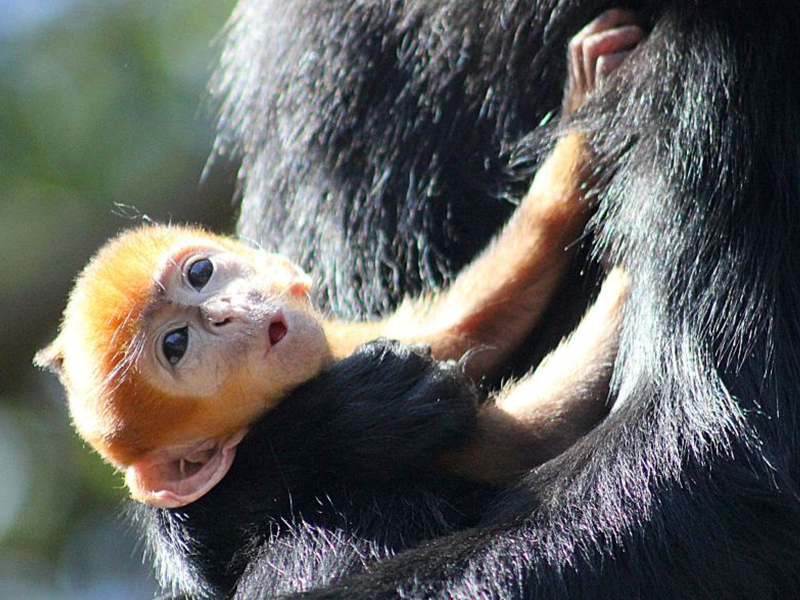 One of the world’s rarest monkeys has been born at Taronga Zoo.

Nangua the Francois’ Langur, named after the Mandarin word for pumpkin, was discovered in mother Meili’s arms on November 7.

Langurs – also known as Francois’ leaf monkeys – are usually born with bright orange hair, which is thought to make it easier for adults to identify and look after infants. Their hair slowly changes until it becomes black when they are about one year old.

The monkeys practice allomothering, which means Nangua will be looked after by all the females in the group.

Taronga Zoo senior primate keeper Jane Marshall said Nangua was already getting lots of attention from his mother and the other females, Noel and Elke.

“Noel has taken on the role of allomother, carrying the baby about 50 per cent of the time,” Ms Marshall said.

“This gives mum a break to eat and rest, but as soon as the baby whimpers she races straight back over to him.”

Francois’ Langurs are now among the world’s rarest monkeys because of habitat loss and poaching for traditional medicines.

There are currently about 2000 of the monkeys in the world, with concentrated populations in northern Vietnam and south-west China.

One of the world’s rarest monkeys born at Taronga Zoo