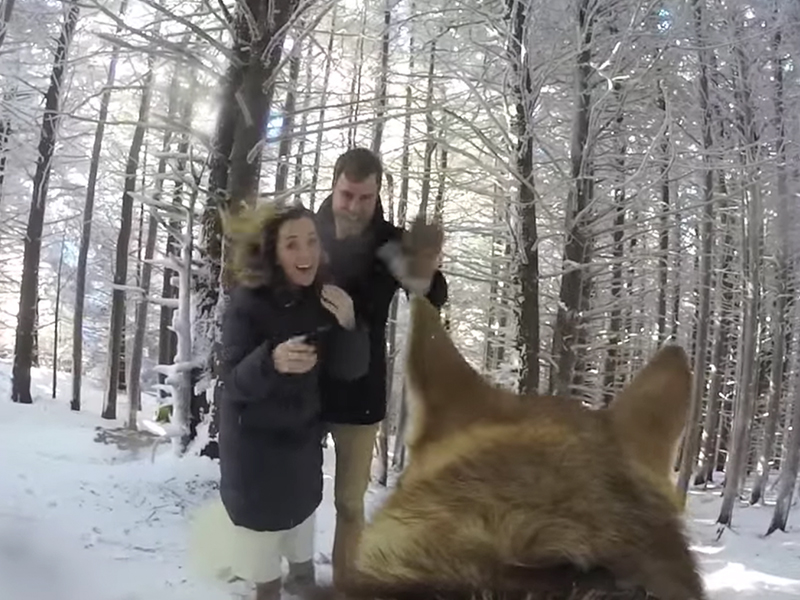 A cute couple in the US have shunned a professional wedding videographer, giving the honour to their even cuter Siberian husky.

He uploaded the dog’s handiwork (or should that be paw-work?) in early November, a year after their ceremony, joking that the pooch “took awhile” to edit the two minutes of footage.

“Our dog, Ryder, insisted on filming the wedding video, so we let her do her thing,” he wrote.

The couple’s “cold and magical” ceremony was held on top of Roan Mountain in Carter County, Tennessee, in almost a metre of snow.

We think Ryder did an amazing job, and Marshall agrees.

“She took awhile to edit the footage, but we think she did a great job.”

Mr Burnette is a film director in Tennessee, so we suspect he may have helped polish up Ryder’s GoPro footage.

The doggy happily trotted around with the camera attached to her collar, capturing a unique, dog’s-eye view of Marshall and Addie’s big day – interspersed with plenty of sniffs, licks and a hearty fur shake.

Ryder filmed Addie getting ready, the couple posing for photos, their exchange of rings and the post-wedding celebration.

When the wedding party first arrive on the snow-covered mountain, the dog sprints across the powder in glee. But she soon calms down enough to get down to serious business.

There was one minor hiccup. The husky clearly wasn’t impressed by the bride and groom’s first kiss – a wedding-goer had to step in to make sure she didn’t miss the big moment. But hey, give the dog a break. She’s new to Hollywood.

A Siberian husky for a snow wedding? Perfect.

Try getting a cat to do that.

More of Marshall Burnette’s work can be found on his website.