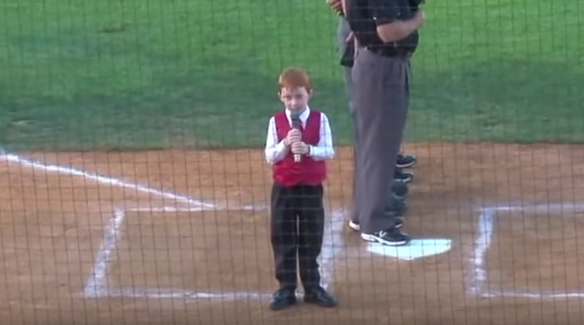 A South Australian boy has won praise for battling through a bad case of the hiccups to sing the Australian anthem at a baseball game.

Ethan Hawke, 7, had the hiccups for a full day before he was due to perform at an ABL match between the Adelaide Bite and the Brisbane Bandits.

As the backing music began, Ethan, in a shiny red vest and black pants, was heard taking a deep breath before launching into Advance Australia Fair.

Despite each phrase being punctuated with an audible hiccup, Ethan pushed through and won the crowd over with his rendition.

Both Adelaide Bite and Brisbane Bandit players struggled to stifle their laughter during the performance, but were quick to all offer the brave singer high fives when he finished.

Speaking after the match, Ethan’s mother, Kylie, said she was proud of her son’s perseverance.

“We are so proud of what he did. You know, others would have fallen apart but he kept on trooping through,” Ms Hall told NT News.

The footage of Ethan singing has already garnered over 300,000 views on YouTube, plus international coverage.

“What a job! Atta kid! Lesser performers would have cut and run, but this first-grader stuck it out,” a CBS Sports report said.