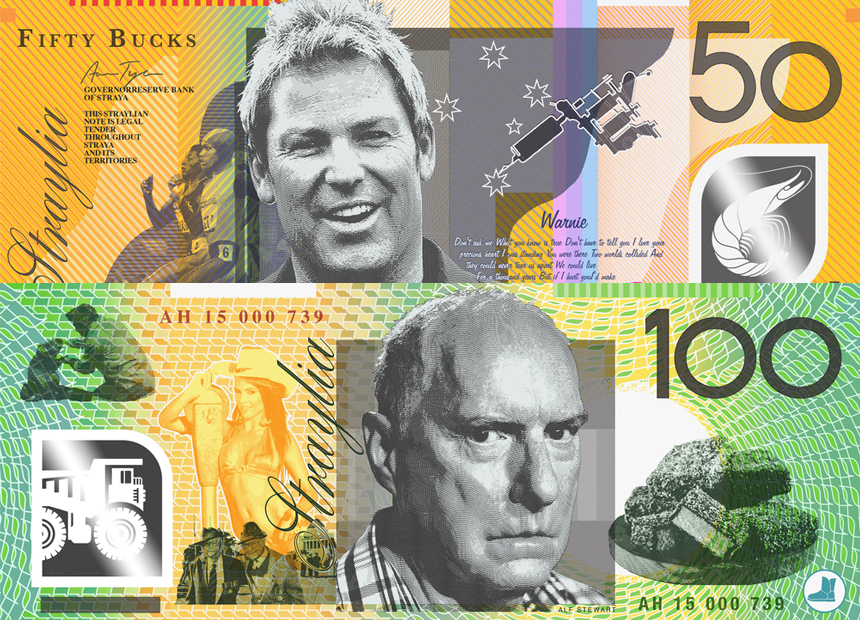 “Straya Cash” replaces figures such as Caroline Chisholm, Sir Frances Greenaway and Henry Lawson with updated heroes: Karl Stefanovic, Kylie Minogue and the Wiggles – even Alf from Home and Away gets a guernsey.

“We see them everyday, but most Australians don’t even know who the people on our bank notes are,” Mr Tyler said in a video on his website.

“It’s time we give them a facelift.”

And he certainly has. Alongside familiar pop culture and Australiana figures Shane Warne, Dame Edna and Ned Kelly, sit the VB logo, a prawn, meat pie, lamingtons and the world “Straylia”.

Melbourne-based Mr Tyler said the idea was born after he noticed a disconnect between the public and our current notes.

“It had been something I was working on throughout the year. I was at a party one night and I realised, after asking a few people, that barely anyone knows who the people on our notes are,” he told Mashable Australia.

“Working in advertising, I’m always looking for new ways to connect people with ideas and I thought, ‘What if the notes only featured faces that Australians can immediately recognise?'”

The artist originally intended to produce just sketches, but eventually ended up spending almost 100 hours on the project.

Although it’s unlikely bank notes featuring an outlaw bushranger, an 18-year old party boy and a man whose tagline is “Get out of here you flamin’ mongrel” will ever be officially adopted, the idea is getting the stamp of approval on social media.

Of COURSE I like this idea – there’s a ute on the twenty! #utesofsurryhills #straya http://t.co/cFVqSlXNmh pic.twitter.com/jfgKE3fwjn

Unvaccinated Pauline Hanson has COVID
‘Should have been a penalty’: Boy crash-tackled by PM gives his verdict
Amber Heard’s sister and friend give evidence
Russian Google to file for bankruptcy
Man arrested at NSW school for bestiality
Concern about COVID-19 deaths in aged care
You won’t believe who crashed this US wedding
Today's Stories