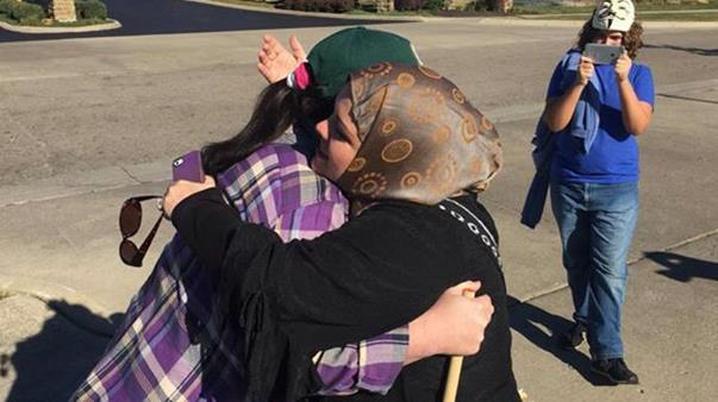 It’s the moment of inter-religious compassion that’s gone viral. The simple gesture of a hug between a Muslim woman and an anti-Muslim protestor.

Known as “Annie”, the lone protestor appeared outside Noor Islamic Cultural Centre in Columbus, Ohio, on Saturday as part of a world-wide anti-Muslim rallies.

Ms de Boutinkhar simply approached Annie with outstretched arms to ask if she could give her a hug.

The woman was taken back by the request, but agreed.

“I grabbed her — I don’t know why I did this — and her whole body just relaxed like a noodle. I backed away from her a little bit, and she smiled.”

Ms de Boutinkhar then said: “I’m an American, too”, and she invited her into the centre.

The two were greeted by a round of applause from members of inside the centre.

“Normally, I don’t go up to somebody who despises me and give them a hug,” she said.

“Something just came across me. Allah? I don’t know.”