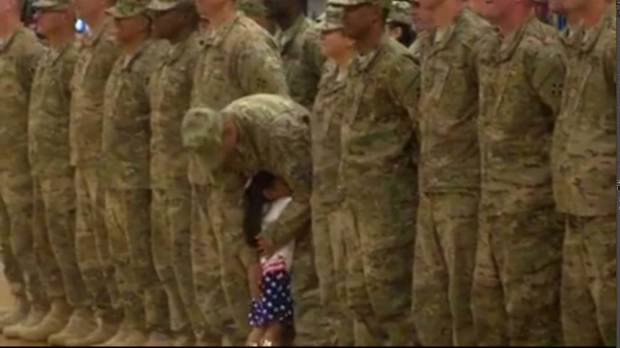 A little girl’s candid reaction to seeing her army Dad for the first time in a year has warmed hearts.

Two-year-old Karis Oglesby couldn’t help but run over to her father, 1st Lt. Daniel Oglesby, while he stood in formation with his fellow soldiers during a homecoming ceremony this week.

A video, since gone viral, shows the cute little girl run across the gymnasium floor in sparkly gold gumboots, and make a beeline for her camo-clad Dad.

Daniel Oglesby bends down to give his young daughter a hug, before sending her back to her seat.

“I wasn’t worried about maintaining the integrity of the formation,” Mr Oglesby told ABC News today.

“The homecoming ceremony is all about our families who’ve had to sacrifice eight, almost nine, months without their loved ones. I was so happy to see my awesome little girl.

“You know, being gone for eight months is tough but once you see the looks on their face when you get back, that makes it all worth it.”

His daughter’s spontaneous decision to run over and embrace Mr Oglesby erased any fears that she might not remember or feel as close to her Dad.

“I was so happy that she was excited to see me – so excited that she couldn’t even wait for the quick ceremony to be over first,” he added.

Mr Oglesby returned from Kuwait just in time for Karis’ birthday the next day, and said he would be taking her and his other daughter Layla to fast-food chain Chuckie Cheese and to a theme park.

“Whatever I can do to make up for the lost time, I’ll do,” he said.

“Whatever they want, I’ll get it for them.”