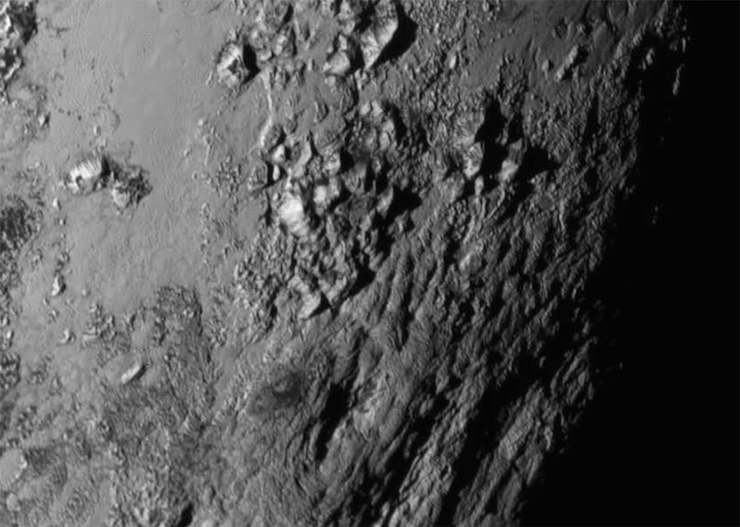 Pluto has posed for its first ever close-up, and it looks fantastic.

During its fly-by on Tuesday night New Horizons came within 12,500 kilometres of the dwarf planet, snapping pictures which were then sent 5 billion kilometres back to earth.

The images show towering mountains among the icy terrain, which comprises frozen methane and nitrogen.

Scientists were also stunned to see a close-up section of Pluto that showed no sign of craters, despite its home in the Kuiper Belt, the region beyond Neptune where cosmic debris is constantly pelting Pluto and its five moons.

NASA said the findings suggested that Pluto was geologically active and contained parts that were youthful in astronomical terms – perhaps less than 100 million years old, a small fraction of the 4.5 billion year age of the solar system.

“The data look absolutely gorgeous, and Pluto and Charon are just mind blowing.“

The piano-sized space probe cost $950 million and was launched in September 2006.

The planet was discovered in 1930 by Clyde Tombaugh, but later downgraded to “dwarf planet” in 2006 due to its relatively small mass.

Charles Bolden, Nasa’s chief administrator, said he hoped the decision could be revised following the exploration.

For space-ophiles not wanting to miss a minute of the action, NASA live streamed the entire fly-by on its website, and developed “Eyes on Pluto“, an app that simulate riding aboard New Horizons.

A previous attempt by NASA to reach Pluto, Pluto Kuiper Express, was canned in 2000 due to a growing budget and a lack of support from NASA.

Today, the @NASANewHorizons team is bringing what was previously a blurred point of light into focus. pic.twitter.com/AswUMZFxqd

Pluto just had its first visitor! Thanks @NASA – it’s a great day for discovery and American leadership. pic.twitter.com/FfztBSMbK0