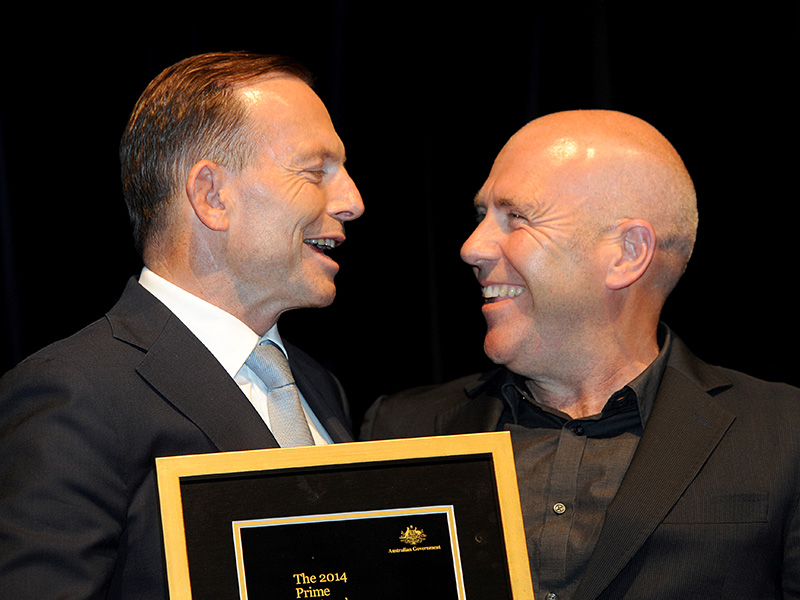 Writing is often a penniless business, but two winners of the Prime Minister’s Literary Awards have given away their prize money to ensure Australia’s vulnerable are better treated.

This year’s Booker Prize winner, Richard Flanagan, was also a co-winner of the Fiction Award last night for The Narrow Road to the Deep North, and gave his $40,000 prize money to the Indigenous Literacy Foundation.

“The point of writing is to draw people closer to being their best selves,” Mr Abbott said.

Flanagan said the usually penurious profession had been kind to him this year and he had decided to give away his $40,000 prize money.

When Flanagan took out the Booker Prize in October for his story about a POW working on the Thai-Burma railway, he told international media he was embarrassed to be Australian because of Mr Abbott’s poor environmental credentials.

This time, as that same PM passed him his award, he said it would all be going to the Indigenous Literacy Foundation.

“The lesson that my father took from the POW camps was that the measure of any civilised society was its willingness to look after its weakest. Money is like shit, my father used to say. Pile it up and it stinks. Spread it around and you can grow things,” he said.

Flanagan said words were the first beautiful things his father knew, and he wanted to help close the Indigenous literacy gap.

“If just one of those children in turn becomes a writer, if just one brings to Australia and to the world an idea of the universe that arises out of that glorious lineage of 60,000 years of Australian civilisation, then I will think this prize has rewarded not just me, but us all,” he said.

Bob Graham, who won the Children’s Fiction Award for Silver Buttons, a tale of a boy taking his first step, said he was giving some of his prize money to asylum seekers.

“I like to think that after the book is closed that he will grow into a man who will have empathy and understanding and compassion for what he sees out there,” he said of his character.

“And it’s in this spirit that I would like to donate $10,000 to the asylum seeker resource centre here in Melbourne.”

Mr Abbott used the night to announce the creation of the Book Council of Australia, conceding the arts were too often viewed as the province of the left.

“Every government should want to encourage all of the voices in Australian life but these voices can only be heard if they’re listened to,” he said.

Steven Carroll, co-winner of the Fiction Award for his book A World of Other People, said literary awards were crucial for the industry.

“It’s probably indicative of the thriving state of Australian literature at the moment, there’s a definite sense of something happening, and it’s quite a thrill to be part of that something,” Mr Carroll said.

Flanagan’s The Narrow Road to the Deep North also won the fiction category at the Queensland Literary Awards on Monday night.

Awards chairman Stuart Glover said it was “a novel of abundant range and depth that will undoubtedly become regarded as one of the great works of Australian literature”.