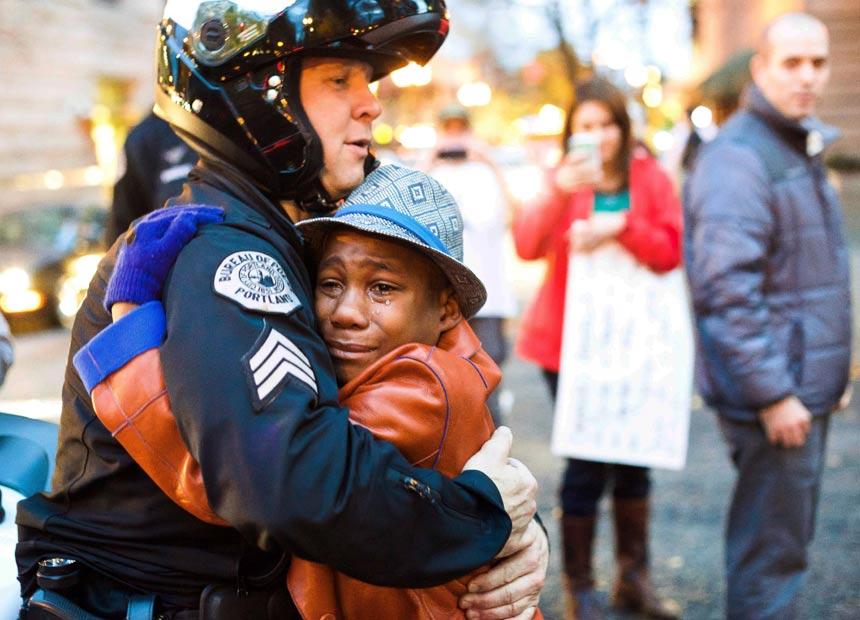 The image of a 12-year-old black boy tearfully hugging a white police officer has been shared globally on social media and hailed as the face of racial acceptance and equality.

The powerful photo was taken during a November 25 protest in Portland, Oregon, supporting the family of slain black teenager Michael Brown.

Brown, 18, was fatally shot by a white police officer in the town of Ferguson, Missouri, in August.

“I saw tears running down Devonte’s face and a sign that said free hugs around his neck,” Nguyen, 20, told Time magazine.

“There was a lot going on, but my gut told right then and there to stay with this kid.”

As Devonte moved through the crowd, a police officer noticed the sign around his neck and stopped him.

“Do I get one of those?” the officer asked.

The pair then embraced before going their separate ways.

Nguyen, who shared the now-viral image on his Instagram page, said he feels it was the photo America needed.

“I think people deep down have been clambering for a glimmer of hope amidst all the negativity going on,” Nguyen said.

“I’m just glad I was there, in the right place and the right time.”

I want to thank everyone who shared my photo today!!! You guys are playing a great role in spreading the message of hope and humanity as seen here in the photo of Sgt. Barnum and Devonte Hart. I also want to thank @theoregonian for being the first to publish my photo and writing the incredible story behind it. You guys are the best. I don’t really use Twitter but now I have a reason to. Follow me on Twitter @chambersvisuals to stay updated! Tune into NBC Nightly News tonight at 6:30 EST. They’re covering the photo and story as well! Spread love, Johnny.

The story behind this powerful Ferguson photo