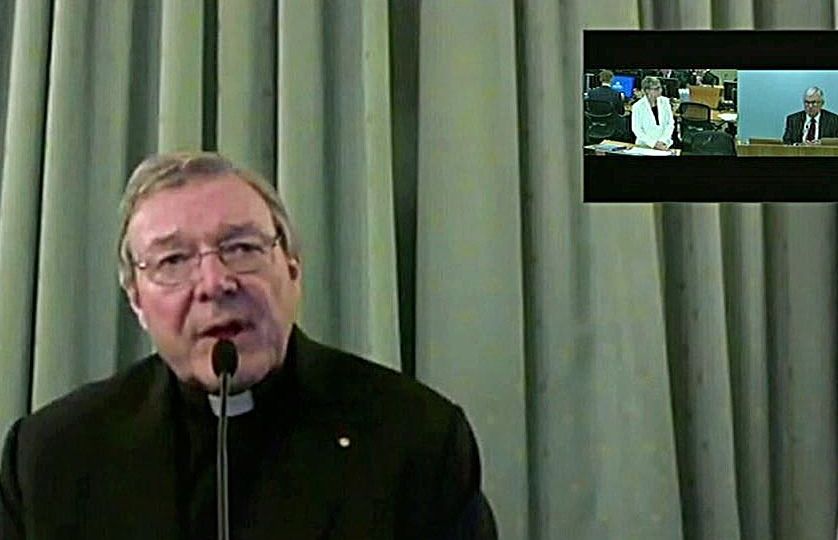 Cardinal George Pell delivered part of his evidence to the royal commission via videolink from Rome in 2016. Photo: ABC News

Cardinal George Pell should have advised senior Catholic authorities to remove a paedophile priest in 1989, the Royal Commission into Institutional Responses to Child Sexual Abuse has found.

But the royal commission has rejected several other claims that were levelled at Cardinal Pell during its hearings, including that he offered a bribe to an abuse survivor to silence them.

In its unredacted reports tabled in federal Parliament on Thursday, the commission found that Cardinal Pell, who was then an auxiliary bishop in Melbourne, should have advocated for Father Peter Searson to be removed.

Father Searson died in 2009 without facing charges, but the commission heard he abused children in parishes and schools across three districts over more than a decade.

Cardinal Pell told the inquiry he was handed a list of grievances and allegations about Father Searson in 1989, but believed the Catholic Education Office and the then-archbishop of Melbourne, Frank Little, were handling the allegations levelled against the priest, and did not think it was his place to investigate them.

However, the commission found, as an auxilliary bishop at the time, Cardinal Pell should have taken action.

“It was incumbent on Bishop Pell, as an auxiliary bishop with responsibilities for the welfare of the children in the Catholic community of his region, to take such action as he could to advocate that Father Searson be removed or suspended or, at least, that a thorough investigation be undertaken of the allegations,” the commission said.

“Cardinal Pell’s evidence was that he could not recall recommending a particular course of action to the archbishop. He conceded that, in retrospect, he might have been ‘a bit more pushy’ with all of the parties involved.

“We do not accept any qualification that this conclusion is only appreciable in retrospect.

“On the basis of what was known to Bishop Pell in 1989, it ought to have been obvious to him at the time. He should have advised the archbishop to remove Father Searson and he did not do so.”

The commission found that a group of teachers from the local parish school who met then-bishop Pell in 1989 may not have advocated for Father Searson’s removal, but Cardinal Pell should have exercised his independent judgment on the matter.

At the time, Father Searson was appointed to the Doveton parish in Melbourne’s south-east, in what the commission termed an “appalling” failure of leadership by then-archbishop Little, who was already aware of complaints against the priest.

“The way in which Father Searson’s conduct was handled within the archdiocese indicates a failure of the system in place to properly respond to complaints, including taking responsible action about those complaints,” the commission concluded.

“It was a failure of management and a failure by the individual church personnel to press that action be taken.”

The royal commission also found that by 1973, Cardinal Pell was aware of child abuse by clergy and had considered measures to avoid situations that “might provoke gossip about it”.

In its report on the Ballarat diocese, the commission said it was satisfied that by 1973, Cardinal Pell had considered the “prudence” of Gerald Ridsdale – who would later admit to abusing hundreds of children – taking boys on overnight camps.

“The most likely reason for this, as Cardinal Pell acknowledged, was the possibility that if priests were one-on-one with a child then they could sexually abuse a child or at least provoke gossip about such a prospect,” the commission said.

“By this time, child sexual abuse was on his radar, in relation to not only Monsignor Day but also Ridsdale.

“We are also satisfied that by 1973 Cardinal Pell was not only conscious of child sexual abuse by clergy but that he also had considered measures of avoiding situations which might provoke gossip about it.”

The royal commission was also satisfied that by the early 1970s, then-father Pell had been told by some students and other priests about Christian brother Ted Dowlan’s offending and that he did not tell the bishop of Ballarat at the time, Ronald Mulkearns.

“Cardinal Pell told us that, with hindsight, he should have done more,” the commission report said.

The commission also found that Timothy Green – a student at St Patrick’s College in Ballarat – approached Cardinal Pell at a swimming pool and told him: “We’ve got to do something about what’s going on at St Pat’s.”

The commission accepted that after Mr Green told Cardinal Pell that Father Dowlan was touching boys, Cardinal Pell said words to the effect of “don’t be ridiculous” and walked away.

However, it was not satisfied of the truth of an allegation that Cardinal Pell shouted at a boy who was trying to report abuse by Father Dowlan in late 1973 or 1974.

Witness BWF, a student at Ballarat’s St Patrick’s College at the time, gave evidence that he was told to go away when he demanded then-father Pell do something about a boy who had been beaten and molested.

“Young man, how dare you knock on this door and make demands,” BWF quoted then-father Pell as saying.

“We argued for a bit and he finally told me to go away and shut the door on me,” BWF said in his evidence.

While the commission accepted that the 12-year-old boy did speak to someone at the St Patrick’s presbytery in Ballarat, they could not be satisfied it was Father Pell.

“While we accept that BWF genuinely believes he spoke to Cardinal Pell, we are not satisfied he did so. We do not know the identity of the priest he did speak to,” the commission said.

The royal commission found that in the 1980s, Cardinal Pell – at the time an adviser to then-bishop Mulkearns – was explicitly told Ridsdale’s “sexual transgressions” were the reason for Ridsdale being moved from the parish at Mortlake.

“We are satisfied Bishop Mulkearns gave reasons for it being necessary to move Ridsdale,” the commission said.

“We are satisfied that he referred to homosexuality at the meeting in the context of giving reasons for Ridsdale’s move.

“However, we are not satisfied that Bishop Mulkearns left the explanation there.

“As Cardinal Pell said, there would have been a discussion.

“We do not accept that Bishop Mulkearns lied to his consultors.”

“We are satisfied that Bishop Mulkearns told the consultors that it was necessary to move Ridsdale from the Diocese and from parish work because of complaints that he had sexually abused children. A contrary position is not tenable.”

The commission found a claim by David Ridsdale, the nephew of Gerald Ridsdale, that he was offered a bribe by Cardinal Pell in 1993 was unlikely.

Mr Ridsdale told the commission he called then-bishop Pell about the abuse he had suffered as a child at the hands of his uncle.

He said he was seeking a “private process” to resolve the matter due to concerns about his grandmother.

Mr Ridsdale told the commission during the phone conversation, Cardinal Pell told him: “I want to know what it will take to keep you quiet.”

“It is more likely that Mr Ridsdale misinterpreted an offer by Bishop Pell to assist as something more sinister,” the commission said.

“There is no compelling reason for the then bishop to make such a statement.

“Knowledge about Ridsdale’s offending was widespread in the community, as we have set out earlier in this report.

“Finally, Mr Ridsdale’s interpretation of the discussion is not consistent with him seeking a private process.”

The commission also found it was unlikely that Cardinal Pell was overheard telling another priest “I think Gerry’s been rooting boys again” in 1983.

That claim was made by witness BWE, a former altar boy at St Patrick’s Cathedral in Ballarat, who said after a funeral he overheard then-father Pell make the comment while in conversation with another priest.

In his evidence to the commission, Cardinal Pell strongly denied the allegation and said every detail was “manifestly false”.

The evidence leads us to conclude that the event as described by BWE is unlikely to have occurred,” the commission said.

“It is likely that he overheard the conversation; however, that conversation was not between the priests he nominated and was not in the context of that particular funeral.”

The commission’s findings concerning the Melbourne and Ballarat dioceses were heavily redacted in its final 2017 report to avoid prejudicing the trial of Cardinal Pell, who had been charged with child sexual abuse.

But his unanimous High Court acquittal in April, cleared the way for the release of the unredacted findings.