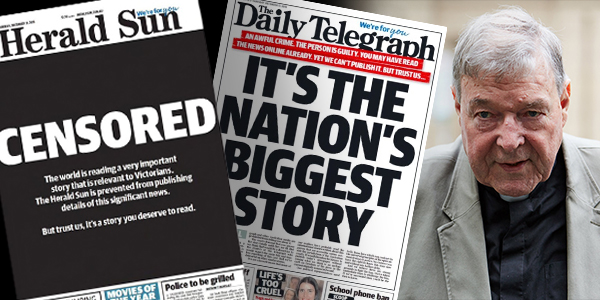 Only 100 charges against 30 individuals in the media remain over reporting of the George Pell case. Photo: Getty

More charges have been dropped against media over reporting on Cardinal George Pell’s sexual abuse convictions, as a judge criticises delays in the case.

More than half the 205 charges against 36 Australian journalists and news outlets have been dropped since Victoria’s Director of Public Prosecutions brought the case last March.

Only 100 charges against 30 individuals and outlets are continuing.

They relate to reporting on Pell’s high-profile sexual abuse trial, which was shrouded in secrecy to avoid prejudicing the case.

But lawyers involved in the prosecution of journalists have been told to hurry.

“This case is going so slowly that I can’t recall the last [hearing in the matter] before me,” Supreme Court Justice John Dixon said during Thursday’s hearing.

“Eleven months on and we’re still talking about the basics.”

Justice Dixon also said the case could be split into 20 different trials.

It came as the media organisations’ lawyer, Matthew Collins QC, revealed another 28 charges had been dropped, including against journalists associated with The Age, Brisbane Times and WA Today.

Charges have been dropped against Fairfax Media, which has been taken over by Nine Entertainment, as well as The Canberra Times.

Pell was found guilty in December 2018 of orally raping a boy and molesting another at St Patrick’s Cathedral in 1996, while he was Archbishop of Melbourne.

The verdict was suppressed until February 2019, when prosecutors decided not to go ahead with a second trial.

The DDP then issued notices to media outlets after some alluded to the verdict while the suppression was still in place, but without naming Pell.

The disgraced cardinal is serving a maximum six-year sentence, but maintains his innocence and is pursuing an appeal with Australia’s highest court.

His convictions were previously upheld by Victoria’s Court of Appeal two judges to one.

The case against media outlets for the reporting on Pell is expected to return to court for another directions hearing at a later date.