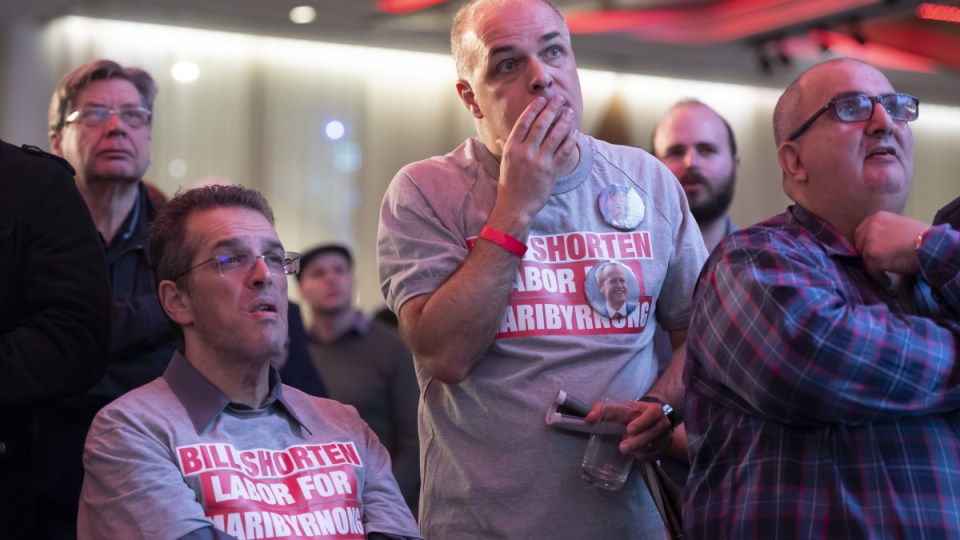 Labor supporters watch the tally count as it becomes clear the party will lose, at the party reception in Melbourne on May 18. Photo: AAP
exclusive

The Labor Party has emerged from the election in the red and is bracing for a $1.8 million budget black hole because it budgeted for a higher primary vote.

The fiscal hangover from Bill Shorten’s election loss means that the ALP faces a budget shortfall under the new rules that govern public funding.

The New Daily has confirmed the funding gap is $1,873,413 for the Labor Party based on expected primary vote of 36 per cent.

Instead, Mr Shorten secured a primary vote of 33 per cent.

But Labor sources insist that the ALP was running a $1 million surplus contingency fund, which means the books will end “marginally” in the red but it will be closer to $500,000, not $1.8 million.

“Although the maths is correct, we had a million dollar surplus that is offset,” an ALP source said.

“The budget was thankfully pretty conservative, so that $1.8 million is offset.”

Even more worrying for the ALP, two of the biggest unions that could bail out the ALP – the CFMMEU and the Electrical Trades Union – are at war with Anthony Albanese over the future of Victorian union leader John Setka.

It is calculated on first-preference votes, not the two-party-preferred vote tally.

The Liberal Party will secure an estimated $27,851,931 from taxpayers for the 2019 under the public funding rules.

The Greens will secure an estimated $7.67 million.

Candidates and parties that secure more than 4 per cent of the vote secure $2.75 for every first-preference vote but must prove election-related expenditure to claim.

An automatic payment of election funding of $10,000 is paid as soon as practicable after 20 days after polling day.

The AEC confirmed those arrangements are under way on Friday.

To secure more than the $10,000, political parties or candidates must make a claim to the AEC.