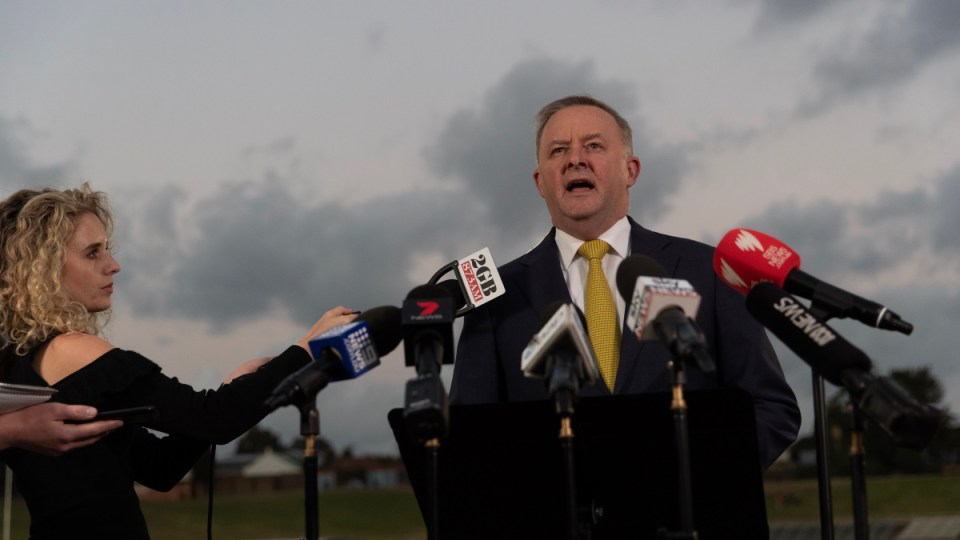 Anthony Albanese says making a decision on tax cuts now for the mid-2020s is a "triumph of hope over reality". Photo: Getty

Labor’s next leader, Anthony Albanese, has urged the government not to “play politics” with Australians’ $1080 tax cuts, accusing the Prime Minister of breaking his first promise by failing to deliver them on July 1.

Scott Morrison has now conceded the timeframe is too tight for Parliament to legislate the promised tax cuts before June 30, despite claiming during the election that they could be delivered “administratively”.

The cuts will be legislated as quickly as possible, with a second refund to be made – if necessary – through an amended return for anyone who lodges their tax return before the laws pass Parliament.

“I note that Scott Morrison has already broken a promise, a very clear promise, that that would be in place by July 1,” Mr Albanese said on Thursday.

But even the passage of the cuts is another hurdle, with the Coalition insisting they must be considered as a package with further tax reductions for middle and high-income earners in 2022 and 2024.

Unless the Morrison government splits the bill or Labor agrees to back tax cuts for the “top end of town”, the $1080 cheques for 10 million Australians could be delayed further.

Mr Albanese urged the PM not to play political games with the $1080 tax cuts, which Labor does support.

“We are preparing to support the first tranche, which is about lower and middle-income earners: The government shouldn’t play politics with this,” he said.

Some of Mr Albanese’s colleagues believe that Labor should support the legislation to put pressure on Mr Morrison to meet his surplus target and deliver $158 billion in tax cuts.

But Mr Albanese suggested this might not be his preferred strategy.

“The idea that you make a decision in 2019 about what happens in the middle of the next decade is, quite frankly, a triumph of hope over experience and reality,” he said.

“The truth is that our international global economic circumstance is very vulnerable.”

Mr Albanese is set to be elected to the Labor leadership unopposed after his only remaining challenger, Queenslander Jim Chalmers, announced he would not contest the ballot.

Dr Chalmers, a 41-year old father of three who held the finance portfolio under Bill Shorten’s leadership, entered Parliament just six years ago but is regarded as a rising star and a future leader.

He signalled future leadership hopes by declaring he wouldn’t be standing as a candidate “this time around” in a statement late on Thursday morning.

“I won’t be putting my hand up for the leadership of the Australian Labor Party this time around,” he said.

“I want to thank the many parliamentary colleagues, branch members, activists, and people from the broader labour movement and from communities right around Australia who contacted me and urged me to run on a platform of generational change.

Dr Chalmers is expected to be a strong candidate for the deputy leader’s position, which will be decided solely by the ALP caucus at its first meeting following the party’s devastating election loss.

However, the contest for deputy leader could also include Victorian MP Clare O’Neil, who has confirmed she is considering a run, while fellow Victorian Richard Marles is also expected to put his hand up.

One of the best things about Labor is that women are encouraged to put themselves forward for leadership roles and I know that will continue.

I’m going to talk to a few colleagues about whether it’s possible for me at this point. (2/2)

Richard Marles will run for Deputy Labor Leadership. Part of his pitch will be that he was not part of previous leadership group that decided key policies.

Dr Chalmers said he had been surprised by the support he had received for a leadership bid.

“I hope I haven’t let them down in making this decision,” he said.

“I gave it very careful consideration and I didn’t take it lightly. There were good reasons to run. But in the end I couldn’t be assured of winning, and if I did win the extra responsibilities of leadership would make it much harder to do my bit at home while the youngest of our three little kids is only five months old.”

“I do want to play a substantial role in rebuilding, renewing and refreshing our party and its policies after Saturday’s stinging defeat, and as a Queenslander I want the best state in Australia to have a more prominent voice in the alternative government,” he said.