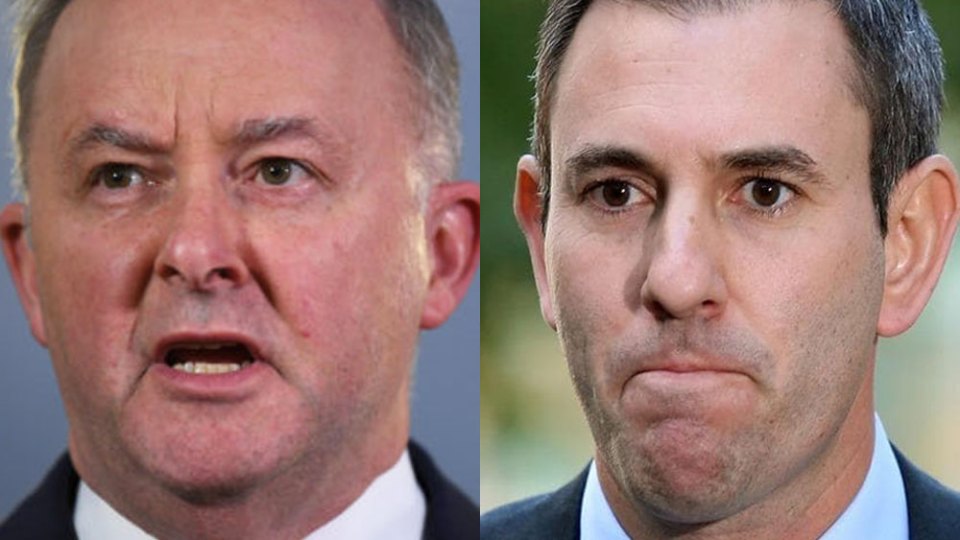 Anthony Albanese and Jim Chalmers: How will the Labor duo respond? Photo: AAP/TND

Labor leadership frontrunner Anthony Albanese, who says he wants to get people of faith back onside, is facing a potential challenger as Queensland’s Jim Chalmers weighs his options for a run at the top job.

Dr Chalmers, the ALP’s finance spokesman and a Brisbane-based father of three is expected to come second and emerge as a strong contender for the deputy role if he decides to run.

But he also wears the baggage of the negative gearing and “retirees tax” polices as a key member of the economic team.

The contest would set up a battle between the Left and Right factions of the Labor Party although a handful of NSW Right faction members – including Tony Burke and Joel Fitzgibbon – have already declared their support for Mr Albanese.

I feel for Chris & I know it would’ve been hard for him to pull out. I’m being encouraged to nominate for leader & I’ll now consider my options overnight. @AustralianLabor needs to rebuild, refresh & renew & I want to play a prominent role in that. What role is to be determined.

Mr Albanese has declared the ALP must revamp its economic principles, reconnect with people of faith and admit campaign “mistakes” on retirees and franking credits.

The former deputy prime minister launched a media blitz outlining his values on Wednesday night on The Project, Sky News and at a press conference at the home of his beloved Sydney Rabbitohs.

“We need to explain our position much better on how we will create wealth, not just how we will share wealth. Unless we are growing the pie then sharing it becomes a case of diminishing returns.”

But Mr Albanese joined Labor colleagues in urging the ALP to reconnect with people of faith, the goal being to repair the ill will spawned by Bill Shorten, who targeted Scott Morrison during the election by asking if he believed homosexuals went to hell.

If he was looking for a sign from above, it came on Wednesday night when the now-former member for the Victorian seat of Corangamite, Liberal Sarah Henderson, conceded defeat to Labor’s Libby Coker.

Labor frontbencher Chris Bowen, who bowed out of the leadership race just 29 hours after he declared his candidacy also called for more respect for religious values.

“People of faith no longer feel that progressive politics cares about them,” Mr Bowen said.

“We had so many messages out there I don’t think it really cut through. We had a bold program because we wanted to do big things in health and education and infrastructure,” he said.

“Clearly we got some things wrong. We need to do it in a way that doesn’t point any fingers.”

.@AlboMP: We should have thought through the impact of the dividend changes in more detail. It became not only about economics but morality. That's where the backlash came from.

Mr Albanese will find out on Thursday if he will be elected unopposed by the ALP caucus as Labor leader or if he will be challenged by Dr Chalmers, triggering a membership ballot.

Labor frontbencher Stephen Jones, from the party’s left, poured cold water on the prospect of Dr Chalmers running for the leadership.

“I’ll leave it to Jim to make his views known, but I’m just saying I’d be surprised if we’re still talking about this next week,” Mr Jones told Sky News on Thursday.

“Anthony has got very strong support both within the caucus and within the rank and file of the party,” he said.

“There is a will within the organisation to have this sorted as soon as possible and move on.”

Even if Dr Chalmers does stand for the position, he is expected to lose and emerge as a candidate for deputy when the leadership is resolved and the ALP caucus votes on the deputy’s job.

“He’s considering running as leader of the Labor Party. If he does he would be good if he was successful,” Mr Albanese said.

The big advantage of having Dr Chalmers as part of the leadership team is that he hails from Queensland, where the ALP’s vote was decimated to a miserable 25 per cent on election night.

“Many people were saying to me they only got $2000 to $3,000 but that was the difference of how they paid their rates, went for an overseas holiday or a holiday domestically up the coast,” Mr Albanese said.

“It made a big difference to them and they had factored it into their retirement. Because of that we there was a view, somehow, that they had done something wrong.”

“So it became not just about the economics, it became about the morality of what they had done,” he said.

“They had done nothing wrong. They had complied with the rules. And we were proposing to change the rules.

“We didn’t respond, really, appropriately. There were a range of things we could have considered.

.@AlboMP: When people look to the federal govt, it's about the economy. We need to better explain how we'll create wealth, not just share it. I think we took positive, job-creating policies to the election but we had too many messages out there.

Speaking after rival Chris Bowen bowed out of the race, Mr Albanese said he had the support of the majority of the Labor caucus.

Mr Albanese previously won the membership ballot against Bill Shorten in 2013 but narrowly lost a vote of the ALP caucus.

“In light the election outcome, we need to reframe our policies and we need to listen to our members and supporters. We must reconnect with working people who did not vote for us. It’s my view that Anthony Albanese is best placed to do that,” she tweeted.

But the right-faction is fighting a rear guard action against attempts to install former NSW Premier Kristina Keneally as the deputy Senate leader.

Regarding the federal ALP leadership contest: As a rank-and-file member of the ALP, I openly supported and voted for @AlboMP in the 2013 leadership ballot. I will be doing so again now as a federal Labor caucus member. (1/3)

In light the election outcome, we need to reframe our policies and we need to listen to our members & supporters. We must reconnect with working people who did not vote for us. It’s my view that Anthony Albanese @AlboMP is best placed to do that.

Ms Keneally has angered colleagues by immediately updating her social media profiles to dump photographs of her with Bill Shorten and replace them with Anthony Albanese.

She has also revealed that she never voted for Mr Shorten in the membership ballot six years ago, instead opting for Mr Albanese.

“Her colleagues are appalled by her treacherous behaviour,” a Labor MP said.

Earlier this year speculation emerged that NSW Right MP Joel Fitzgibbon could be prevailed upon to relinquish his hopes of returning to cabinet and becoming a the Speaker to make way for Ms Keneally on the frontbench.

Anthony Albanese turns to God in Labor leadership bid – but a Queensland son hails, too