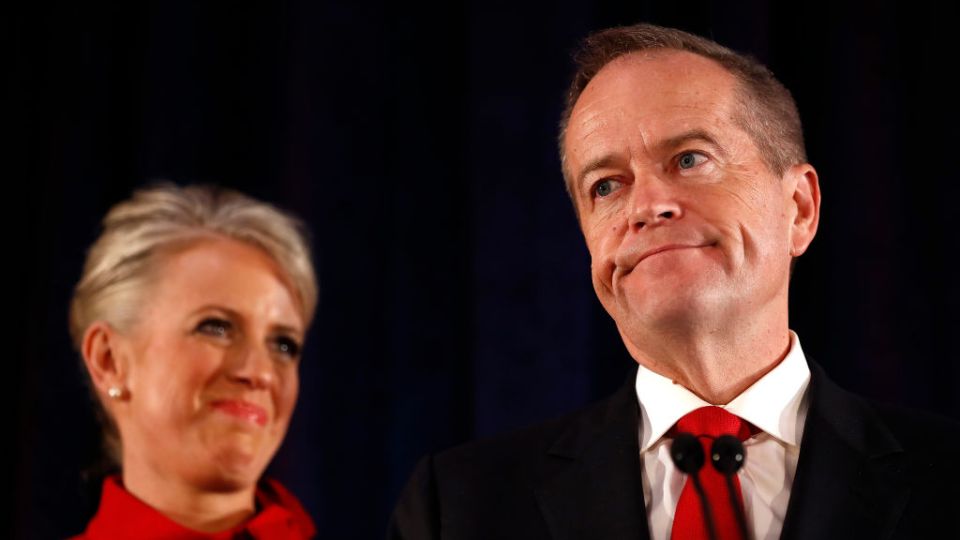 Bill Shorten, with wife Chloe, as he conceded he had lost the election. Photo: Getty
exclusive

Australia’s most trusted polling agency, which prepares Newspoll and Galaxy for News Corp newspapers, was also paid by the Labor Party to provide its tracking poll for last Saturday’s election.

Accusing the pollsters of contributing to a “smoking crater” for Labor, the ALP’s former pollster John Utting has told The New Daily he repeatedly raised concerns about the potential conflict of interest with campaign director Noah Carroll.

“I raised concerns with Noah and no one acted on them,” Mr Utting said.

“The actual nightly tracking stuff was done by Galaxy. No wonder Bill looked shattered on the night.”

The same pollsters were also used by Labor’s NSW campaign director Kaila Murnain in the NSW election in March.

“They also did the fantastic jobs for Kaila Murnain in NSW,” Mr Utting said.

“Look at the smoking crater that was.”

The New Daily has obtained a copy of the Federal Election Nightly tracking poll prepared by YouGov Galaxy for the ALP.

“Across the 2PP (two-party preferred), there’s 20 seats they are polling. It showed as swing to Labor of 1.5 per cent,” Mr Utting said.

“Where, in fact, across those seats the swing was against Labor on election night. A prediction of 50 per cent 2PP versus a result of 47 per cent. What it tells you is Bill went in expecting to win: A Hillary Clinton moment.”

“There’s a whole question of conflict of interest here.

“But … the Galaxy numbers were just as wrong in the published stuff as they were in the ALP polling.”

On the Friday before the election, Mr Carroll briefed Mr Shorten and key Labor figures on the polling, conceding it was “patchy” in seat by seat polls. But Mr Shorten was convinced he could get over the line.

The New Daily has confirmed with YouGov Galaxy managing director David Briggs that his company also did political research for the Labor Party in the national campaign, and did ALP polling for the NSW election.

“We don’t boast about it. We don’t deny it,” Mr Briggs said.

Mr Briggs said there was no conflict of interest in the business arrangement.

“How can it be a conflict of interest?” he said.

“The two things can happen very independently. Everything is very silo-ed.”

While Newspoll predicted Labor was widening the gap against the Liberals with a 51.5 per cent lead over the Liberals the actual result was reversed on election night with the Liberals in a narrow lead of 51 per cent.

Mr Briggs said the polling for the ALP and Newspoll was kept completely separate and did not cross over or use the same voters.

“When you look at the polling record here, before Saturday we were the most trusted brand. We did the exit poll for Channel Nine. But also we’ve been doing work for SevenWest Media,” he said.

Mr Briggs said while pollsters needed to improve their methodology, the seat-by-seat polling told the story.

“The reality is in the campaign we did 22 seat polls that were published. And they demonstrated something quite different, that the Coalition was picking up Herbert and Lindsay and losing Gilmore,” he said.

“If you come up with something that is not the prevailing narrative you get attacked.”

Mr Briggs also took to Twitter on Tuesday to add to his response, saying “the selective leaking of parts of the research” did not show the full scope of YouGov Galaxy’s work during the election campaign.

“The research conducted by this company, across tracking polls and in marginal seat polls, provided the ALP with an accurate appraisal of the state of its vote across a number of seats that would eventually be lost by Labor,” he said.

“What Labor strategists and decision makers … chose to do with these findings are matters for them.”

Message from David Briggs, Managing Director of #YouGov #Galaxy, on the discussion around the #ALP National Campaign in #Australia. pic.twitter.com/zY8ccI5b1D