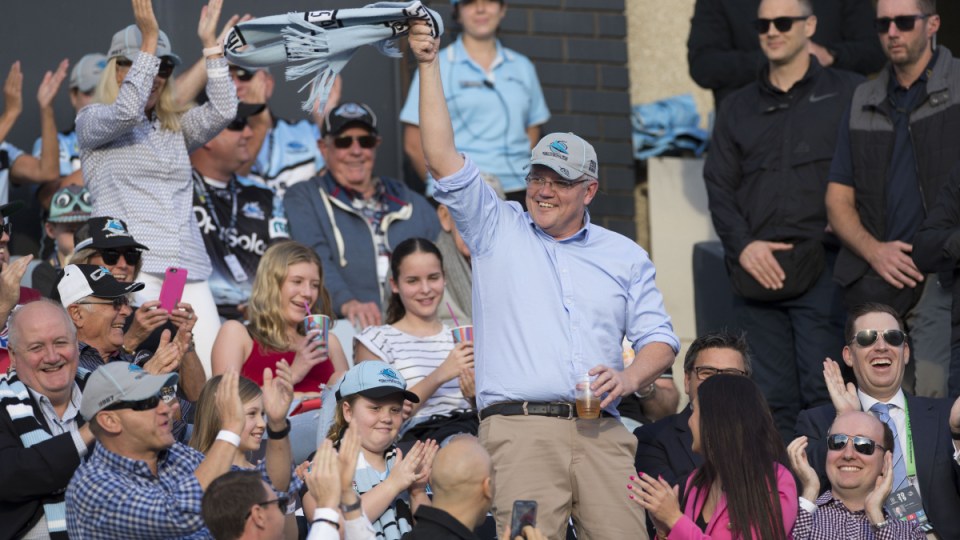 Not even a Sharks loss to the Sea Eagles could deflate Scott Morrison's spirits. Photo: AAP

Scott Morrison has been met by cheering crowds at a home-turf rugby league match less than a day after he led his party to victory in the federal election.

The returning prime minister and his daughter were mobbed by football fans as they entered the Sharks Leagues Club decked out in the team’s official merchandise on Sunday evening.

“Who’d miss this?” a beaming Mr Morrison told reporters before shaking hands and posing for selfies with Sharks supporters.

Mr Morrison is a prominent supporter of the Sharks and member for the Division of Cook, which encompasses Cronulla.

However Manly put a dampener on his election celebrations with a resounding 24-14 NRL win over Cronulla.

There was no election-style “miracle” comeback from Cronulla after gifting Manly a match-winning 20-point lead inside the opening 45 minutes.

On Sunday afternoon New Zealand Prime Minister Jacinda Ardern phoned Scott Morrison to congratulate him on his election victory and said he had an “affinity” with her country.

“New Zealand and Australia have the strongest of ties and they will continue. I look forward to continuing to strengthen the relationship between our two countries in the coming years,” Ms Ardern said in a statement on Sunday.

Ms Ardern said she offered the prime minister and his wife Jenny her congratulations on his election victory “in what was a close and hard fought election”.

“Prime Minister Morrison has an affinity to New Zealand having lived and worked here. He understands us, which is very helpful to the Trans-Tasman relationship,” Ms Ardern said.

She said she had also contacted Opposition Leader Bill Shorten.

“Bill has done a great job in unifying the Labor Party and fought a strong campaign. I wished him and Chloe the best of luck for the future.”