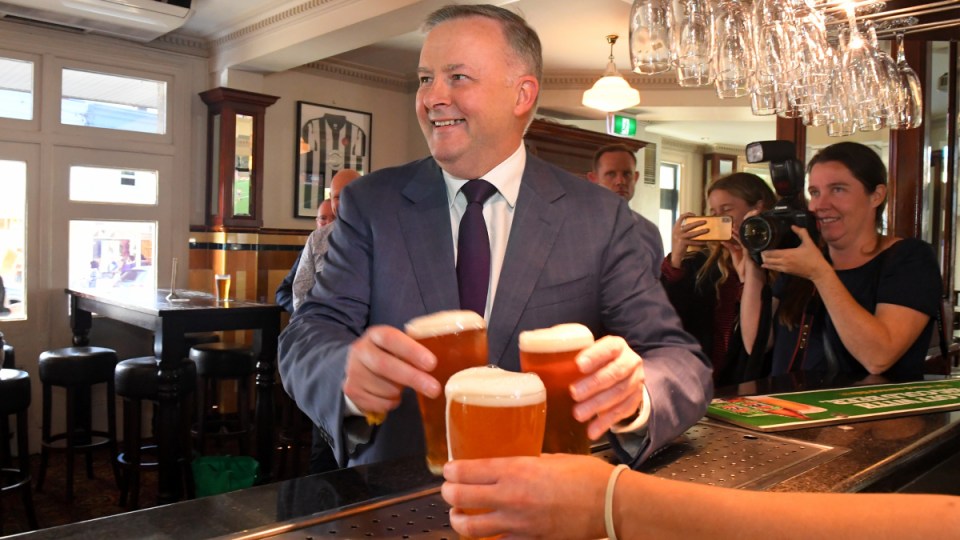 Anthony Albanese says he will lead Labor to the next election. Photo: AAP Photo: AAP

Anthony Albanese has pitched himself as the “rough around the edges” housing commission success story Labor needs to win back working-class votes, emphatically throwing his hat in the ring – likely alongside at least three others – to replace Bill Shorten as leader.

Mr Shorten’s deputy Tanya Plibersek withdrew from the leadership race on Monday afternoon after being tipped to be Mr Albanese’s main rival in what will likely be a weeks-long battle for the role.

Confirming his leadership bid from the ALP “birthplace” of Balmain in Sydney’s inner-west on Sunday afternoon, Mr Albanese hinted he was the battler his party needed to better resonate with voters and explain the party’s plan to secure jobs.

“We need to articulate how Labor vision will drive jobs, economic growth and prosperity,” the long-standing Grayndler MP said.

The 56-year-old added: “I grew up in a house with a single mum on an invalid pension … I know what it is like to do it tough.

“I have an affinity with working people.”

As shell-shocked party faithful recovered from the election loss, that ABC analyst Antony Green labelled a “wipe out”, the painful post-mortem began. The ALP led the polls – so what went wrong?

Earlier, Ms Plibersek had said she was considering joining the race, saying she believed Labor would have performed better if it had properly explained how its policies would benefit individuals.

“Our policy agenda, it was big, it was bold – but I think perhaps we didn’t have enough time to explain all of the benefits of it to the people who would benefit,” Ms Plibersek said.

Mr Shorten told reporters outside his Melbourne home it was too early for a “post-match analysis”, simply pointing to one clear problem: “We didn’t get enough votes”.

Speaking on ABC’s Insiders, Ms Plibersek said of a bid to replace Mr Shorten: “I’ll talk to my colleagues today – but, of course, I’m considering it.”

“You can’t change the past, but you sure can change the future.” Thank you Bill. You could not have worked harder or done more. And thank you Chloe. I’m proud to have campaigned with you.

The Australian is reporting that the outgoing leader, Mr Shorten, has told colleagues he’ll be backing Ms Plibersek’s bid for the top job.

Saturday marked the end of weeks of fierce campaigning by both major parties. But by late evening as an unexpected result looked likely it became apparent another battle was about to begin.

By 11.30pm Mr Shorten had not just conceded defeat, but said he would stand down as leader.

Rules that govern how the party chooses a new leader were changed by former prime minister Kevin Rudd in 2013 to prevent a repeat of the instability of the Rudd-Gillard-Rudd prime ministerships. To prevent a coup, contenders must now muster the support of ALP rank and file as well as the Labor party room.

Mr Albanese was then the party membership’s so-called people’s choice to replace Mr Rudd. But on that occasion, the caucus backed Mr Shorten.

It took just minutes after the Opposition Leader’s speech for Mr Albanese to announce his intention to contest the leadership.

There was also speculation Labor frontbencher Tony Burke could be a candidate, while shadow treasurer Chris Bowen emerged as a possible contender, but he said he would need to speak to his family before making a decision.

But the party’s favourite may remain a mystery for now. And even if internal polling was made public, Saturday’s federal election result has cast doubt on how much weight should be given to those poll numbers.

For some clue, experts are predicting it may be better to follow the money. University of New South Wales professor of economics Richard Holden has suggested online betting may be a more accurate predictor than the polls.

“Polls failed to foresee the Brexit decision, and suggested Hillary Clinton would be elected president of the United States in 2016,” he wrote in The Conversation.

By Monday morning, as it became more likely Ms Plibersek would contend, they were each at equal odds at $2.

The lesser-known and less experienced Queensland MP Jim Chalmers was at $6, followed by Chris Bowen at $10.

Speaking at a press conference on Sunday, Mr Albanese said he had “strong values” on the economy and infrastructure investment, as well as inclusive social policies and a commitment to looking after Australia’s most vulnerable.

“People know that is the case. You can go anywhere in Australia and see something that I supported and advocated for, secured funding through government processes for, which are now open,” Mr Albanese said.

“But you will also see my policies in terms of social inclusiveness.

“I am somebody who in my first speech spoke about the need to remove discrimination on the basis of gender, race, religion and sexuality.

“We are a fair country. We are a multicultural nation. You will see my respect for that come through in terms of social policy.”

He added that his concerns came from “lived experience” and he understood Australians would not want “someone who just utters talking points”.

“What you see is what you get with me, for better or worse. I am a bit rough at the edges … I will not be as articulate as someone who is simply reading from a script,” Mr Albanese said.

He said Mr Shorten had his respect and had fought a “tough campaign”.

“He has been an inclusive leader and is someone who has campaigned on a policy agenda in the interests of working people,” Mr Albanese said.

Anthony Albanese the front-runner to be next Labor leader