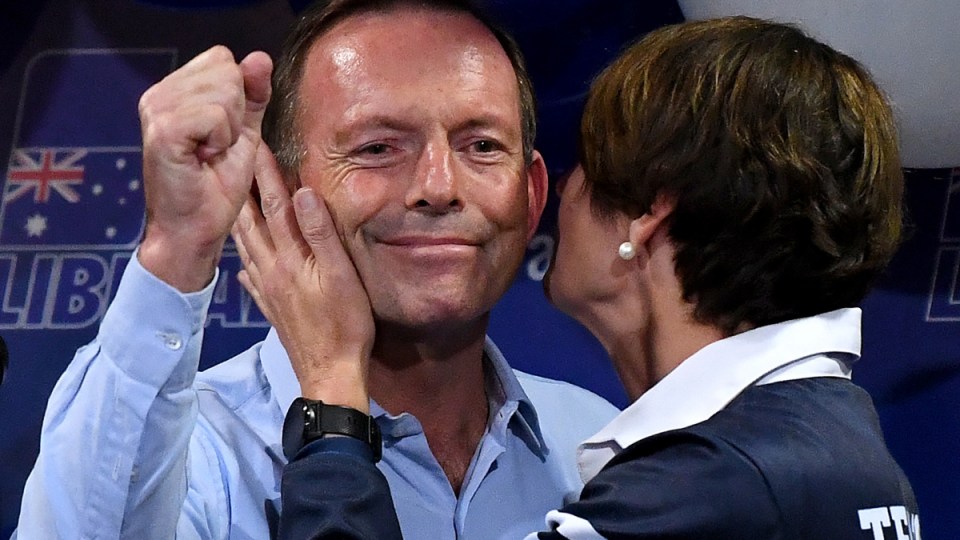 Former prime minister Tony Abbott has lost his blue-ribbon seat of Warringah after 25 years, in what may be one of the most shocking blows of the election.

“And you all showed that when communities want change, they make it happen … this is a win for moderates with a heart.”

She said she would like to pay tribute to Mr Abbott, whom she praised as a “dedicated” community leader.

“Nobody can doubt his community spirit, his work ethic … and his contribution to this community,” Ms Steggall said.

Conceding defeat shortly after 8.30pm Saturday, Mr Abbott said he had known it would be a tight contest since last year’s Wentworth by-election.

“I can’t say it doesn’t hurt to lose – but I decided back in October last year that if I had to lose … I’d rather be a loser than a quitter,” he said.

Wentworth was then won by independent Kerryn Phelps after a 19 per cent swing against the Liberals in the seat formerly held by Malcolm Turnbull.

With wife Margie by his side on stage at a bowls club in Manly, Mr Abbott said that although he had lost his seat, he was confident the Coalition would form government.

“Of course it’s disappointing for us here in Warringah, but what matters is what’s best for the country,” he said.

“It’s not so much who wins or loses Warringah but who does or doesn’t form a government in Canberra.

“The good news is that there is every chance that the Liberal-National Party has won this election. This is a really extraordinary result, it is a stupendous result.”

Acknowledging the fierce campaign waged against him, Mr Abbott congratulated his opponent on her win.

“I do acknowledge the fierce and ultimately successful campaign that has been waged by my political opponents,” he said.

“I do congratulate Zali Steggall on what is a magnificent win for her. I hope she has a long and successful career as a local member.”

At last count Saturday the vote showed a 13 per cent swing against Mr Abbott, who had held the seat for 25 years.

His rival polled a primary vote of 45 per cent.

The battle for Warringah was a bitter campaign that dominated the national conversation, with Mr Abbott labelling it “the fight of my life”.

With about 67 per cent of votes counted, the Australian Electoral Commission was predicting a victory for Ms Steggall, with a two-candidate-preferred figure of 58 per cent.

“I would have thought it would have been a bit tighter than this, but it looks like real trouble [for Mr Abbott],” Sky News commentator Peta Credlin said.

The former prime minister was elected to the traditionally safe Liberal seat in 1994 and held it on a comfortable 11 per cent margin at the last election.

The backlash against Mr Abbott was sparked by a number of issues, but most notably his position on climate change – something he infamously dubbed “absolute crap”.

During his time as PM, Mr Abbott dismantled emissions reduction efforts – in contrast to Ms Steggall, who has pledged to support climate change action.

Speaking to reporters near the polling booth at Manly Village Public School on Saturday afternoon, Mr Abbott said he was “confident”.

“There is absolutely no doubt that GetUp!, the green left, have put massive resources into this seat … and I think the message is that people have got to resist very strongly that green-left ideology because it’s doing enormous damage to our economy.”

Mr Abbott was targeted by grassroots community action group GetUp! which sent 600 volunteers into the electorate with the specific aim of ousting the ex-PM.

His destabilising role in Malcolm Turnbull’s government, as well as his part in Peter Dutton’s failed leadership challenge last year, also contributed to the swing against him.

Mr Abbott was also a key campaigner for the ‘no’ side during the same-sex marriage plebiscite, a position that put him at odds with his electorate which voted overwhelmingly in favour of same-sex marriage.

Ms Steggall, who had 1400 volunteers working for her by the end of the campaign, said on Saturday she had noticed a “strong shift” in the electorate.

“It won’t be about Tony but, actually, about the rest of the Coalition, especially the Liberal Party. That it has moved too far to the right, it has abandoned its moderate base,” she said.

“There are a huge amount of sensible-centre, moderate Liberals who just want more integrity, better standard of debate, more respect in the debate but also more future-focus.”