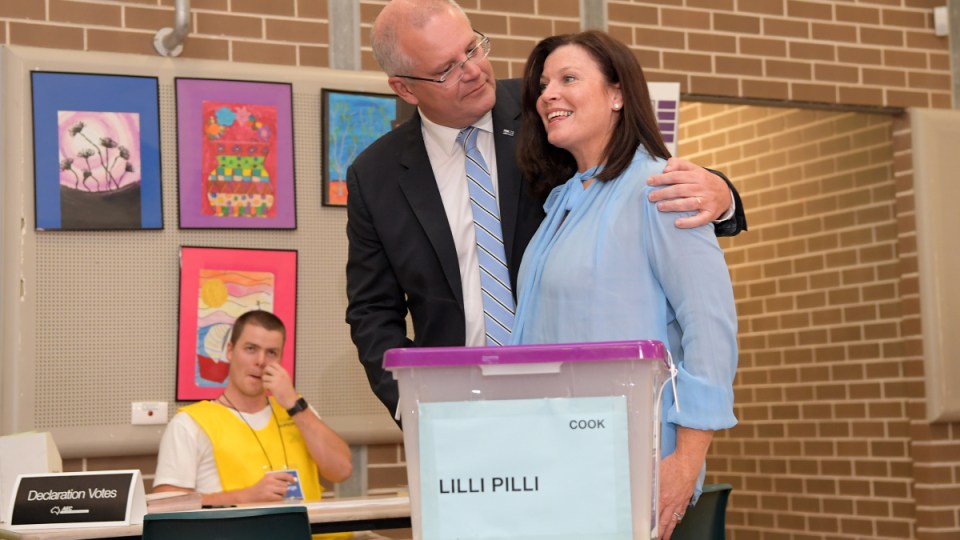 On his final day of campaigning, Prime Minister Scott Morrison spent his election morning in northern Tasmania before jetting back to Sydney to cast his vote four hours before polling booths close.

With many predicting a likely election defeat, Mr Morrison is keeping the faith and hoping many of the 4.6 million people who voted early have sided with the Coalition.

“There is a clear choice,” he said.

Arriving at a Cronulla school about 2pm with his wife Jenny and daughters Abbey and Lily to vote in his home seat of Cook, where he has been the member since 2007, Mr Morrison said this federal election was a “choice about who you want to continue to be the Prime Minister of this country, myself or Bill Shorten”.

“Tonight the votes will be counted and we will see what the outcome is. I make no assumptions about tonight. I respect this process. It is dear to my heart, the democracy of our country.

“I don’t take anyone’s support in this country for granted,” he said, speaking to reporters afterwards outside Lilli Pilli Public School in Cronulla,” he said.

Members of the Sutherland Woodworking Club were chuffed to present the prime minister with a guitar carving, complete with a “ScoMo” engraving.

His old neighbour Val Coy, outside handing out Liberal how-to-vote cards, wrapped her arms around him.

“I better go and vote for this bloke now – I hear he’s pretty good,” the prime minister joked.

The Morrison team earlier visited Tasmania twice in the final week of the campaign, pointing to tightening internal polls that suggest they could snatch the marginal seats of Bass and Braddon from Labor to offset expected losses in Victoria.

He speculated the last time there was a prime minister in Tasmania on polling day was when Tasmanian-born Joseph Lyons was in office during the 1930s.

Telling sign that Scott Morrison has bolted down to Tasmania on Election Day in seat of Bass – a Labor Loss in Tasmania crucial for Libs to keep dream alive of being able to form minority government – sounded like Bill Shorten was staying put in Melb today ? https://t.co/zZsFBkrou4

The party’s chances in the sprawling rural seat of Lyons were dealt a blow at the beginning of the campaign, when Liberal candidate Jessica Whelan was dis-endorsed after making anti-Muslim comments on Facebook.

The decision has forced the Morrison campaign to back the Nationals candidate Deanna Hutchinson – splitting its vote in the key seat.

On Saturday morning, the prime minister began election day in Launceston in time for polling booths to open.

Labor holds the seat of Bass on a margin of 5.4 per cent.

The group sang Happy Birthday to Ms Archer, who is turning 44 on election day.

The prime minister then said it was “democracy sausage time”.

Unfortunately, only bacon and egg rolls were available at 9am.

The prime minister then made a 100km trip to Devonport, descending on Ulverstone Secondary College in the electorate of Braddon which is held by Labor’s Justine Keay on a margin of 1.7 per cent.