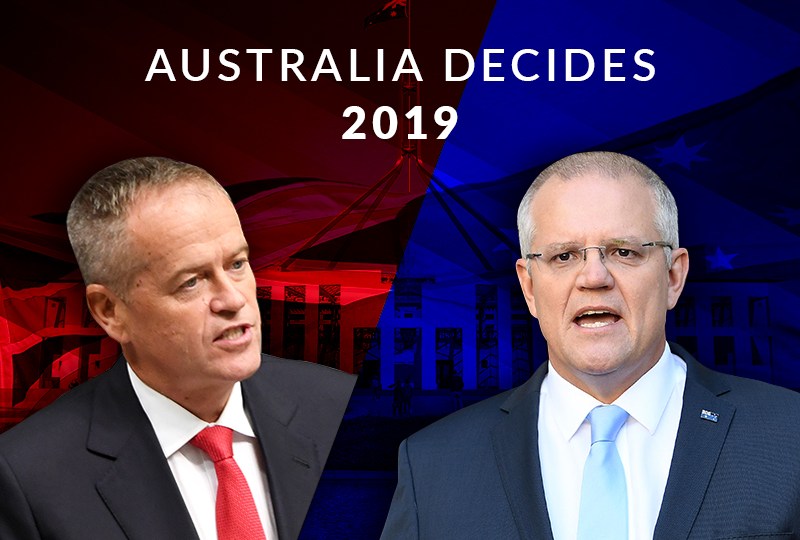 Scott Morrison is "assuming nothing" while Bill Shorten says there's "mood for change".

Expected swings to the Labor Party have failed to materialise, with the Coalition claiming an unlikely victory against all the odds.

With 93 per cent of the vote counted, the ABC had given 74 seats to the Coalition and 65 to Labor, six seats to independents and minor parties, with six seats yet to be called.

A minimum of 76 seats is needed to form a majority government in the 151-seat Parliament.

At his concession speech about 11.30pm, ALP leader Bill Shorten that he will stand down as leader, as a nightmare unfolded for the ALP in Queensland.

“Now that the contest is over, all of us have a responsibility to respect the result, respect the wishes of the Australian people and to bring our nation together,” he said.

“However that task will be one for the next leader of the Labor Party because while I intend to continue to serve as the member for Maribyrnong, I will not be a candidate in the next Labor leadership ballot.”

The shock result rocked the ALP and defied up-to-the-minute polls that predicted the Labor Party would win a slim majority.

The New Daily understands that the ALP’s internal tracking poll never had the party on track to form more than minority government on 76 votes or lower.

But the result was far worse than the ALP could have predicted with Labor strategists conceding even their polling did not pick up the shock loss of multiple seats in Queensland, where the party received a primary vote of just 26 per cent.

While former prime Minister Tony Abbott lost his seat after 25 years in the seat of Warringah, conservative warrior Peter Dutton won the seat of Dickson with an increased majority, despite a ferocious campaign by GetUp and unions.

The Coalition took a hammering in Victoria where there was a 2.09 per cent swing against it, helping to deliver Labor the seat of Dunkley and Corangamite and giving it big gains in the seat of Chisholm – the former seat of Liberal defector Julia Banks. And despite tough battles, the other marginal Victorian seats of La Trobe and Flinders were held by the Coalition.

One of the biggest stories of the day was the stunning defeat of former prime minister Tony Abbott in the seat he held for 25 years. In the blue-ribbon seat of Warringah, with almost 40 per cent of the two-candidate-preferred vote counted, Mr Abbott was projected to finish the night on around 40 per cent, with independent star candidate Zali Steggall on more than 60 per cent.

His open opposition to action on climate change, and the leadership tensions and chaos around the downfall of Malcolm Turnbull, led voters to desert the former prime minister in drove.

Former Liberal deputy leader Julie Bishop described the result as an “inevitable outcome”, but said the Coalition still had a “narrow path” to holding on to office.

While Labor moved the pendulum in Victoria, the Liberal vote in Queensland, NSW and Tasmania were robust.

In the previously safe seats of Blair in Ipswich and Lilley in central Brisbane, Labor suffered swings of 5.2 per cent and 7.7 per cent respectively, with the seat of Longman being returned to the Coalition after it was held in a 2018 byelection by ALP incumbent Susan Lamb. Statewide, the ALP suffered a swing against it of 4.3 per cent.

“It’s been tough in Queensland for a fair while for Labor federally,” Labor senator Penny Wong told the ABC.

“We always thought that was going to be a state where the margins of some of the seats, notwithstanding where the two-party preferred nationally was, would mean that we would have a tough time.”

The Labor seat of Braddon in Tasmania was given to the Coalition, while Bass projected to also fall. Labor retained the marginal seat of Lyons.

The strong showing by the Coalition flew in the face of a Nine exit poll on Saturday which predicted a swing of 2.4 per cent to Labor.

The survey of 3301 voters at 33 polling booths across the country, has suggested that the swing of 2.4 per cent would put 13 Coalition seats within reach of Labor.

The latest Newspoll released on Saturday morning also showed Labor edging ahead of the Coalition by 51.5 to 48.5 per cent on a two-party preferred basis, and primary votes of 37 per cent and 38 per cent respectively. If applied uniformly across the country, Labor would win 81 seats in the larger 151-seat Parliament.