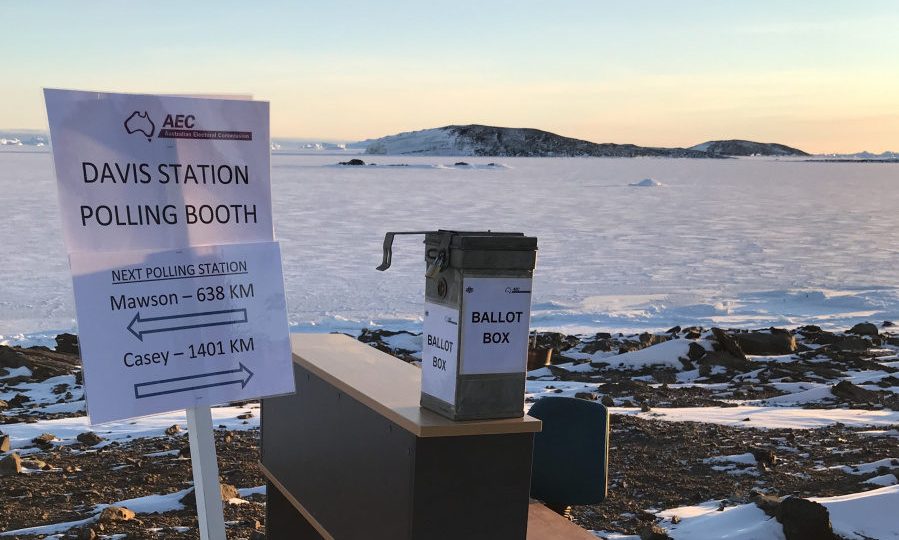 From hours journeying through the dusty desert, to filling out a ballot form with a freezing hand in the middle of Antarctica, voters are going to extraordinary lengths to have their say this Saturday.

Behind the scenes, electoral workers have traversed 35,000 kilometres across the nation and beyond – crossing seas and covering vast stretches of land in cars, buses, planes and even helicopters.

Paul and Kate Watts drove an hour up a dusty gravel road to arrive at a roadhouse.

As far as offerings in the Northern Territory go it was a short commute and the digs at the Top Springs roadhouse were plush – gents and ladies toilets, a few tables and scattered plastic chairs. And compared to years gone by the two-hour roundtrip was a luxury.

“We had to petition for this voting booth. If it wasn’t here we’d have had to travel much further up to eight hours to Katherine just to vote,” Mrs Watts told The New Daily.

Mr and Ms Watts are just one couple who go to considerable lengths to vote.

The pair live on a cattle station known as Moolooloo Station about 400 kilometres south of Darwin in the Northern Territory.

On the station it is them, a team of workers and some 20,000 cows. They have limited internet, no phone reception and no radio signals.

“It’s hard for us to even know when an election has been called. It’s lucky we know that it’s on this year,” Ms Watts said with a laugh.

Their remoteness is not unique in this part of Australia and that is something the Australian Electoral Commission (AEC) recognises.

This year the voting authority has sent more than 400 teams to remote communities – many in the Northern Territory and Western Australia – to ensure people like Mr and Mrs Watts have easier access to the vote.

Marcy Cross is another example. She used to live in the sparsely populated Tiwi Islands, located about 80 kilometres off the shores of Darwin. She now resides in the city but she recalls the last federal election.

“I was so grateful that they (the AEC) were there because otherwise you sort of have to do the postal vote. But even that can be hard to get to sometimes. Some of the communities there are just so small,” Ms Cross said.

“I remember we had to make the booths at the local shire rooms at a specific time and if you miss them (the AEC) you had to go to Darwin via a ferry to vote,” she said.

Geoff Bloom is the AEC’s NT director of operations and is in charge of making voting easier for residents in the sparsely populated territory.

He says that in the space of two weeks remote polling teams will traverse 35,000 kilometres in a bid to collect 16,000 votes.

And it has been an ambitious mission, crossing seas and covering vast stretches of land to get to remote areas.

“It is certainly an adventure. Some of these places are so remote that  our staff are lucky to set up under a tree. Usually in those situations it’s just a table, some boxes and that’s it,” Mr Bloom said.

“And of course you see some pretty interesting things on the road. In the past dingos have sat under our voting tables,” Mr Bloom said.

“But you know people ask why do we go? Well it’s important we get to as many as possible to provide people with the opportunity to vote, not just city folks.”

Indeed the AEC is a highly dedicated body. As well as having remote polling teams it also sends personnel to nursing homes, to hospitals and even to prisons to collect people’s votes.

The mission to secure Australian votes does not stop at our borders.

As well as having 85 official voting stations overseas (to accommodate the globetrotters) the AEC has targeted the continent of Antarctica.

Dr Meg McKeown is part of the Australian Antarctic Division as a medical practitioner. She is based at the Davis research station, along with 18 other people.

Dr McKeown says people at the base are looking forward to exercising their democratic rights on the ice.

“I am often working away from home, either in Antarctica or overseas and I still think it is important to cast a vote and have a say in who we elect to manage important matters on our behalf,” she said.

Three research stations – Mawson, Davis and Casey – are all registered as official polling places in the Antarctic.

The AEC carries out the voting process here a little differently.

From there the AEC emails the relevant ballot papers to the officers, which are then printed and given to the expeditioners who vote.

Once the polls close, the returning officer opens the box and reads each paper out by phone to an AEC officer in Hobart, who transcribes the votes and includes them in the count.

But what of the traditional post-vote, democracy sausage?

On Wednesday, when the Davis team voted, it was one of the coldest days of the season, with temperatures down to -25 degrees Celsius– ruling out any successful barbecue.

Undeterred, the Davis team still did something uniquely Australian.

“Well we managed a game of footy in lieu of a sausage sizzle while we waited to vote,” Dr McKeown told The New Daily.

Other people who find it hard to vote can be those who work in mines and offshore facilities.

Rose Petal is a fly-in-fly-out worker in Western Australia who works at a gold mine site in the Bandya area.

“While on site we often don’t listen to the radio, or watch TV, or read the paper even – at least I don’t. So some of us are mostly unaware of any government news. Sometimes I don’t even realise there is an election on. I like it that way,” she told The New Daily.

For workers like Ms Petal, getting their vote can be a challenge for the AEC who do go out to some – but not all – mine sites.

To cater to these workers the AEC offers voting stations at nearly all the airports that shuttle workers to and from sites.

Last election Ms Petal voted after she spotted one of these booths at Perth Airport.

“It made the process much easier just to do it on the hop. I’ve seen entire teams of people voting that way before heading to the mines,” she said.

Regional towns make the most of voting day

Yet not all regional towns and remote workers are privy to early visits from the AEC, or have access to early voting booths.

But the wait is worth it when it election day turns into a huge party for remote locals to catch up.

One such town is Julia Creek in the McKinlay Shire of Queensland. This coming weekend the 500 or so residents descend on the town centre to vote and take part in a unique horse race.

“Basically all the station owners and everyone will come into town to vote and then the next day they’ll stay for the Campdraft,” 19-year-old Lachlan Sollitt told The New Daily.

Campdraft is a unique Australian sport involving a horse and rider working cattle. The rider picks out one of the cattle in the camp and brings it to the front of the camp and block and turns it at least two or three times to prove they have the beast under control.

The local pub hand, Mr Sollitt said Campdraft was an annual event and the election being on the same weekend was fortunate timing.

“I think everyone knew they had to vote this weekend, so it made sense to put Campdraft on too. It’s basically everyone brings their horses and then everyone gets on the piss,” he laughed.

Whatever the outcome on Saturday night, there will be plenty of people raising a glass to democracy.

Polling booths on Antarctic ice: The extraordinary places Australians are casting a vote