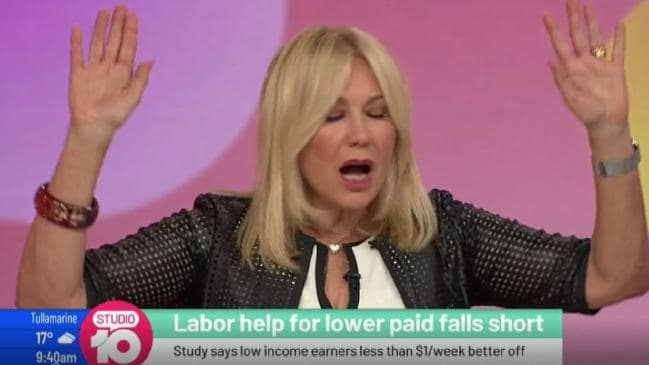 Kerri-Anne Kennerley had a spray about the Labor party on Studio 10, warning about a future under Bill Shorten. Photo: Studio 10

Kerri-Anne Kennerley is predicting doom for Australia in an extraordinary rant about the “end to life as we know it” if Labor wins Saturday’s federal election.

“If Bill Shorten gets in, it’s the end of life as we know it,” she said. “Honestly, without question.”

“One thing I’m seriously outraged about, the millions and millions they’ll spend on a Gender Commission,” Ms Kennerley said.

The Labor party has indicated it has not allocated funding, nor has any plans to launch, a ‘gender commission’ as claimed by Ms Kennerley.

A quick search of the ALP’s policies shows none relating to a National Gender Centre despite reports claiming as such in the conservative media.

The television host’s headline-grabbing outburst raised some derision including this Tweet from political journalist Amy Remeikis.

If I become one of those 60-something white blonde women ranting about shiz I have no understanding of on national TV, like I have some right to be heard on these issues because I used to be relevant 100 years ago, please just lock me away somewhere, away from cameras

The Labor party responded directly to Ms Kennerley and she provided an update in a later segment of Studio 10.

A Labor spokesperson said in a statement to The New Daily the ALP was committed in other ways to supporting the LGBTIQ community.

“Labor has a proud record of promoting and defending the rights of LGBTIQ people,” the spokesperson said.

“When Labor was last in Government we introduced an unprecedented number of reforms and rights protections for LGBTIQ Australians, ending legal discrimination in 85 pieces of Commonwealth legislation.

“We do know there is more to do.

“Included in our broad range of initiatives include action to protect LGBTIQ students and staff from discrimination in schools, working with the states and territories on a nationwide ban on so-called “LGBTIQ Conversion Therapy”, making HIV history through a package of measures to end new infections, and providing small grants to LGBTIQ community organisations.”