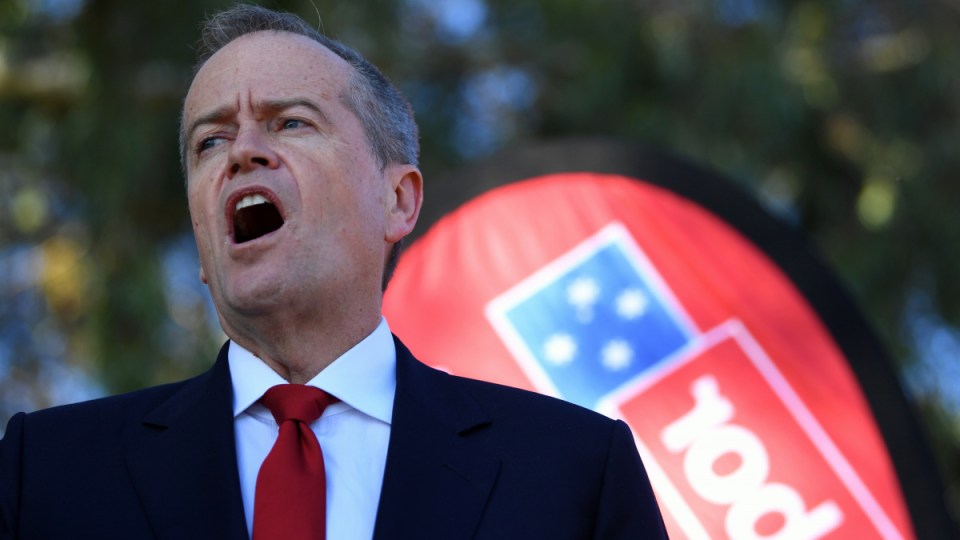 Less than 48 hours of campaigning remain and it’s safe to say we have  officially reached the point of election frenzy.

The leaders’ focus is firmly on getting the undecided voter off the fence and into their camp.

Opposition Leader Bill Shorten on Wednesday summed up his campaign to the undecided: “… on Sunday morning … will we have chosen hope over fear?”

Prime Minister Scott Morrison also hammered home his message that only his government will deliver a strong economy and housing.

Onwards to the rest of Day 35 happenings.

Mr Morrison was in the Victorian regional cities of Geelong and Wangaratta, before heading to Sydney.

Mr Shorten was campaigning in Perth.

The Opposition Leader even made time to try his hand at bricklaying in the seat of Pearce.

All the promises appear to have been laid out. It is now about reinforcing messages.

Liberal: The PM wanted to emphasise his first-home buyer scheme and infrastructure investments, but wanted to avoid talking about his same-sex marriage beliefs.

Labor: Mr Shorten plans to make it easier for workers to have wage theft claims dealt with, but ventured into scare campaign territory by stressing the Coalition’s offerings (or lack thereof) of “climate, chaos, cuts and Clive [Palmer]”.

“We’re the only game in town on a wages policy. You could send out search parties from here to Christmas and you won’t find the Liberal wages policy.”
–Mr Shorten confirms he has a wages policy

“It grieves my soul that young girls are killing themselves in remote indigenous communities and I will do everything I can to stop that.”
–Mr Morrison commits to end indigenous youth suicide

“In this election, what Australians are telling me wherever they go is, ‘For goodness sake, Bill, end the chaos’.”
–Mr Shorten says the solution is to vote for Labor

“Having these minor parties in the Senate for our country, it’s like having your foot on the accelerator and the brake at the same time.”
–ALP deputy Tanya Plibersek drives punters to action

Coalition to release costings: Treasurer Josh Frydenberg confirms the Coalition will release its updated costings on Thursday, two days out from the election.

Labor released its figures last Friday, setting a record for the time gap between election day and the publication of opposition policy costings.

Josh Frydenberg hasn’t even lodged the Coalitions costings yet #pmlive

Early voting update: The ticker keeps climbing on this one.

As at 5pm on Tuesday, three million Australians had voted early – up from 1.6 million in 2016.

As of COB Tuesday approximately 3m people had cast their vote at an early voting centre for the 2019 federal election. Around 400k voted yesterday. #ausvotes  #auspol

Speaking on The Kenny Report on Sky News, Mr Anderson said that media not pushing Labor on its costings were “contributing to the yellow vest moment we are headed for”.

Battle for Warringah heats up: In the hot seat with the challenge of independent Zali Steggall, Tony Abbott turned heads by saying the ALP had better climate change policies than the Coalition.

The Age reported that Mr Abbott does not believe Ms Steggall would support a Coalition government, given that she says climate change is the biggest issue facing Australia.

Even Tony Abbott thinks you should vote Labor for real action on climate change #auspol pic.twitter.com/bqu1Mg2MZy

It an election tradition to look to the gods or mystics for a prediction.

This year it’s the Darwin-based psychic croc called Burt, who has predicted Bill Shorten will win.

The bookies may as well stop taking bets …

Burt the croc has spoken. He has predicted – by way of meat selection – that @billshortenmp will win the upcoming federal election on Saturday.

Campaign diary: Burt the Croc predicts winner as leaders sum up their messages