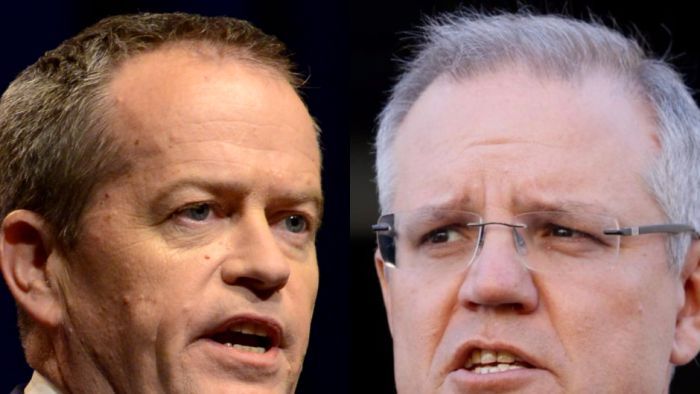 Both leaders are expected to announce billions of dollars for separate road and rail projects in Melbourne as the two political parties vie for vital seats in the Victorian capital.

Mr Morrison will target women on Mother’s Day with a promise of $36 million towards peri-natal depression checks in hospitals, supporting about 100,000 people.

“This is a cause close to my heart that has hit close to home,” Mr Morrison said.

“Too many parents have suffered in silence, but we’ve got their back.”

Opposition Leader Bill Shorten will start the final week of the election campaign in Melbourne, celebrating his birthday and participating in the Mother’s Day Classic fun run.

The annual event raises money for the National Breast Cancer Foundation’s research to improve detection and diagnosis of breast cancer and treatment options.

The prime minister has repeatedly argued his campaign launch will not be about “party hoopla”, sledging Labor’s recent launch for lauding its luminaries.

Instead, he will take centre stage to “have a conversation” with voters
as he seeks to make the May 18 poll a presidential-style race between himself and Mr Shorten.

“It’s not about party festivals and slapping backs and doing all that sort of stuff. People aren’t interested in all that rubbish,” Mr Morrison said.

Mr Shorten said the guest list was interesting given a slew of former prime ministers are set to miss the function.

“I love that the current fellow says he’s sort of Iron Man, he’s the Lone Ranger and he doesn’t need the Liberal Party,” the Labor leader said.

“Maybe the Liberal Party isn’t coming because they’re not that keen on him.”

Labor is hoping to pick up several Victorian seats at the federal election on May 18, while the Liberals are still trying to cauterise the damage done by overthrowing Malcolm Turnbull as party leader.

On Saturday, Mr Morrison kicked off the weekend bearing gifts at a children’s netball match in the eastern Melbourne seat of Deakin.

The funding for netball – easily the most popular female sport in the country – is part of $70 million the Coalition has vowed to spend on sporting centres and events.

Part of that package includes $15 million to give the national women’s soccer team, The Matildas, a permanent home in Melbourne.

Change rooms will also be upgraded to female-friendly standards at 124 sporting fields across Australia.

This new funding will see hundreds of change rooms upgraded across the country; secure the future of Australian netball; establish a permanent home & high performance centre for the @TheMatildas in Melbourne; and improve nationwide facilities for aspiring Olympians. pic.twitter.com/CHA2pMAKiI

He promised to restore $37.5 million to the Australia Council, as well as $8 million for an indigenous theatre company.

“You make judgment on our arts policy – I reckon it’s a ripper.”

Elsewhere in Melbourne’s suburban battleground the news was not good for the Coalition, with the latest polling suggesting the seat of Higgins could fall.

Climate change and the dumping of Malcolm Turnbull are other factors putting the government under pressure in the high-income enclave, which was put in play by Industrial Relations Minister Kelly O’Dwyer’s retirement and changing demographics that have seen an influx of young voters.

The Liberals are running paediatrician Katie Allen against Labor’s Fiona McLeod and the Greens’ Jason Ball.

According to The Sunday Age, Labor’s internal polling recently placed the Coalition ahead on a two-party preferred basis, but only just with the electorate dividing 51 to 49 per cent.

placed the Coalition just ahead of Labor by about 51 to 49 per cent on a two-party preferred basis – a sharp fall from the healthy 58-42 per cent margin Ms O’Dwyer secured at the 2016 election.

Ms O’Dwyer, who inherited the seat from former Treasurer Peter Costello, for whom she worked as a staffer, won the seat with a 7.4 per cent margin over the Greens at the 2016 election.