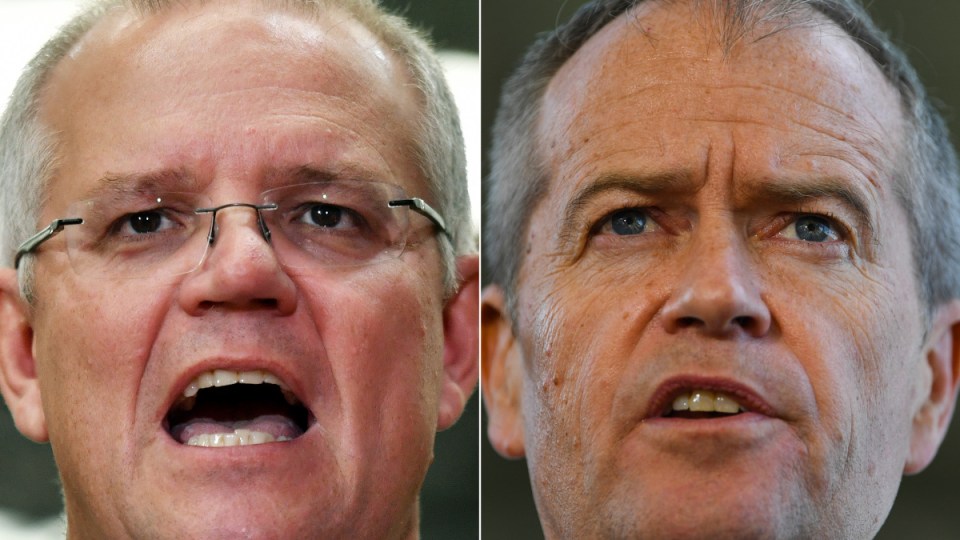 Day 28 – Wednesday – was dominated by a tabloid story about Bill Shorten’s mother, and the Opposition Leader’s emotional display as he defended his mum.

Mr Shorten may not be the only one in tears … bookmakers Ladbrokes announced it had received its biggest single wager of $1 million for Labor to win the election.

The very confident and very wealthy punter who lives in New South Wales stands to collect $1.23 million if they are correct.

Ladbrokes is one barometer for confidence, but the Voter Choice Project paints a less-certain picture.

It shows there is no overall national trend, but shows Labor’s best chances lie in Victoria, Tasmania and Western Australia. NSW is holding steady for incumbent MPs, while Queensland and South Australia are tracking towards the coalition.

Mr Morrison was in Sydney, visiting Parramatta and Reid.

Mr Shorten was in southern New South Wales in the seat of Gilmore.

Liberal: The focus was on wooing dairy farmers with a suite of policies, including $10 million to help farmers reduce energy costs and $3 million to help establish farm co-operatives.Labor: Mr Shorten promised to “rescue” hospitals and provide them with more funds within his first 100 days of office.

“My mum is the bravest person I’ve known.”
– Mr Shorten honours his mother

“This election is not about our families.”
– Mr Morrison backs his opponent on media stories

“They’ve even got ancestors in the family tree who were convicts. I’m waiting for that to come out in the Telegraph!”
– Mr Shorten, on what the tabloids will come up with next

#MyMum: The article about Mr Shorten’s mother evoked a fierce Twitter response from people whose mothers sacrificed their own ambitions for their families.

Well done, you @dailytelegraph! A front-page trashing of Bill Shorten via his late mother not only leads to his best day of the campaign but you have inspired the most wonderful stories via #MyMum. So what’s tomorrow? #AUSVote2019 https://t.co/qE1dnKEXhz

#MyMum had to leave school at the age of 12 to work the farm as her family was so poor. She came to Australia without a word of English, worked on tobacco farms & then factories till her body couldn't take it anymore to raise 2 kids & give me & my sis the freedom & life we have. pic.twitter.com/MngZsbCeMN

#MyMum was the smartest person I knew growing up. I often wonder if #MyMum was alive today … all the opportunities she would have + the things she could achieve.#MyMum didn’t have those opportunities, however, she raised 7 kids + continues to be their inspiration. pic.twitter.com/V4LetzrXlJ

#MyMum worked P/T while studying to finish her teaching degree. She could only afford to go to university because of Gough Whitlam. She is the daughter of Italian immigrants. When Mum graduated I went to her graduation ceremony with my Dad as part of her PROUD cheer squad. pic.twitter.com/gDMdrU8Y1P

Greens candidate quits: This time it was the Greens who cut loose a candidate over offensive social media posts made years ago.

Candidate for the Melbourne seat of Lalor, Jay Dessi, was forced to quit on Wednesday after numerous posts surfaced, including a racist joke about an Asian friend.

The pair issued their first joint statement in 28 years in The Sydney Morning Herald, saying “the design and structure of the modern Australian economy was put in place exclusively by Labor”.

There is just something so wholesome about this photo of Bob Hawke and Paul Keating. 💞 #thisislabor#auspol #ausvotes #paulkeating pic.twitter.com/JKTDiokBJj

The two former Labor leaders were last in partnership in 1991, when Mr Keating resigned as treasurer to challenge Mr Hawke for the top job.

Arriving in Melbourne, Mr Bainimarama said climate change should be at the top of the national agenda.

“In Fiji, we have already moved three communities and have a priority queue of about some 40 others waiting to be relocated,” he said.

Campaign diary: #MyMum, a reunion and a Greens candidate exits