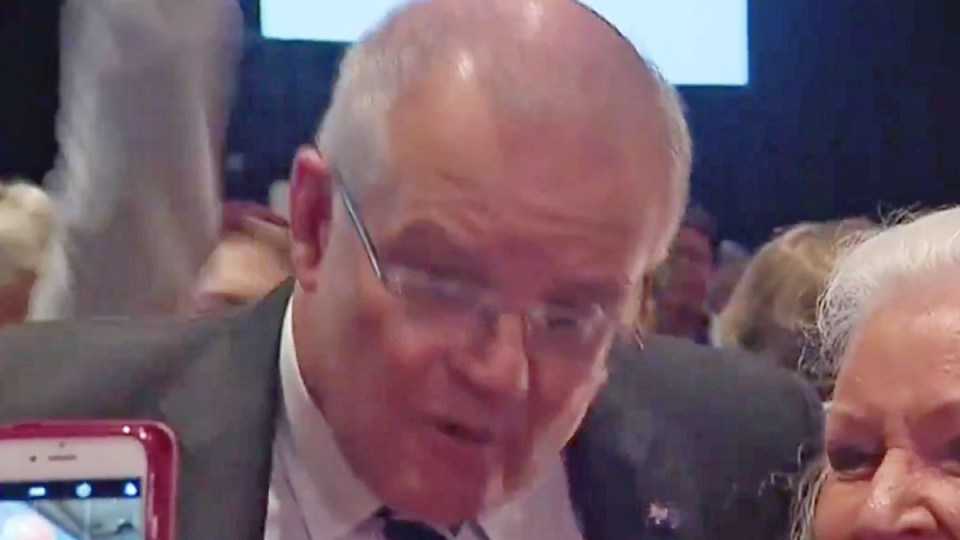 PM Scott Morrison as the egg flies over his head on Tuesday.

Prime Minister Scott Morrison has been egged by a female protester at a Country Women’s Association event in Albury.

NSW Police have confirmed a 24-year-old woman has been charged with common assault following the incident on Tuesday.

No one was injured, although a 70-year-old woman nearby was knocked to the ground as the PM’s security team restrained the egg-thrower.

The egg appears to have bounced straight off the Prime Minister’s head when it was hurled at him.

Footage of the incident shows him spinning around and touching his head, which does not appear to have anything on it.

One Liberal later described the attempted egging as a “piss-poor effort”.

The woman who allegedly threw the egg later cited her objections to Mr Morrison’s policy of detaining refugees on Manus Island. She was wrestled to the ground by security staff before walking to the police station with a friend to hand herself in.

This girl says she’s sorry an older woman got caught up in the debacle – she brought a 6 pack of eggs pic.twitter.com/EHWxSBCdVb

The woman denied the egging was a violent act.

“It was the most harmless thing you can do,” she said.

The female protester said she regretted that an older woman was caught up in the fracas.

“That was not intentional at all,” she said.

NSW Police later confirmed the woman had been charged with common assault and possessing cannabis. She was bailed to appear in court in  Albury on May 27.

There are conflicting reports the protester might have momentarily tapped the Prime Minister on the head as she attempted to hurl the egg.

Mr Morrison took to Twitter to condemn the incident and said his only concern was for Margaret Baxter, the 70-year-old who was caught up in the fracas.

“I helped her up and gave her a hug. Our farmers have to put up with these same idiots who are invading their farms and their homes,” the Prime Minister tweeted.

“We will stand up to thuggery, whether it’s these cowardly activists who have no respect for anyone, or militant unionists standing over small businesses and their employees on work sites.”

My concern about today’s incident in Albury was for the older lady who was knocked off her feet. I helped her up and gave her a hug. Our farmers have to put up with these same idiots who are invading their farms and their homes.

But that fired up ACTU president Sally McManus.

“How dare you accuse us of this and make the association?’’ she tweeted.

“You seem to have no respect for the truth or any concern about running down your fellow Australians. We would never support such behaviour.”

Ms Baxter, who recently had stomach surgery, was not injured.

“All I know, I saw a guy with a camera start to wobble and he knocked me and I went down,” she said.

“I found out later that there was a protester trying to get in but I didn’t see the protester.

“I have to say that the prime minister helped me get up off the floor – and I was very grateful for his assistance.”

Later on Tuesday, Mr Morrison laughed off the incident, telling a campaign event in the nearby Victorian electorate of Indi that there was one woman at the Albury morning tea who might need to get some better ideas from the CWA about how to use eggs.

“This might be a good “community service”, he joked.

The incident in Albury follows an earlier egging of Senator Fraser Anning in Melbourne by teenager Will Connolly. He was wrestled to the ground by Senator Anning’s supporters.

Police opted not to charge anyone following that incident.