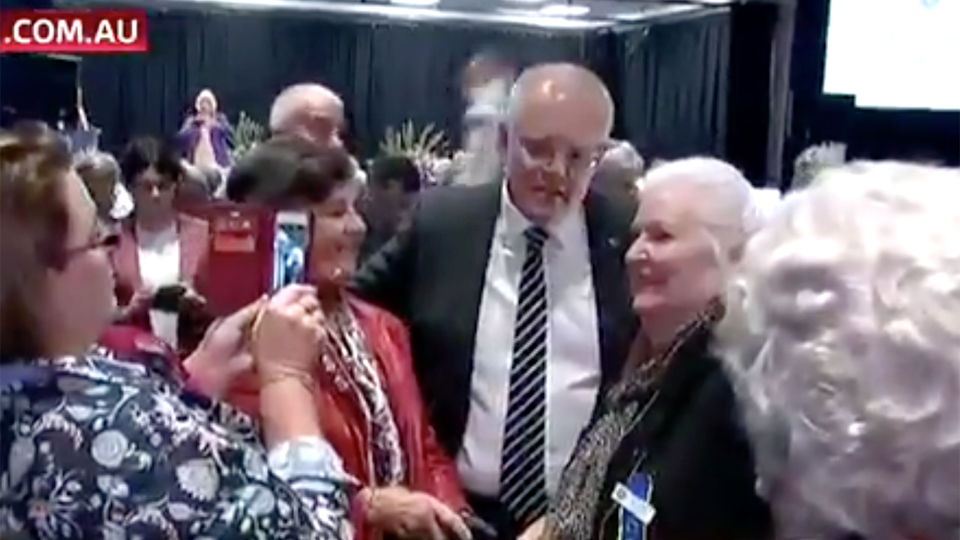 Prime Minister Scott Morrison when he was egged by a woman during the election campaign. Photo: Twitter/Sky News
analysis

Prime Minister Scott Morrison is not the first politician to be egged, and he will not be the last.

But he is, dare we say it, in excellent company.

Ever since Roman governors were pelted with turnips, or theatregoers hurled rotten food at Shakespearean actors, angry citizens have reached for a suitable projectile to express their displeasure.

For many protesters, you simply can’t beat an egg. The only difference now is we have YouTube to capture the moment forever.

On Tuesday, 24-year-old Amber Paige Holt was charged with common assault and possession of cannabis after allegedly attempting to egg the PM.

“It was the most harmless thing you can do,” she said after the incident.

Ms Holt later told reporters it was motivated by the coalition’s policy on refugees and Manus Island.

She also apologised to an elderly woman who was knocked over in the fracas by the PM’s security team as they attempted to restrain her.

Ms Holt has previously railed against broadcaster Andrew Bolt on her Facebook page, praising the Greens for attacking him.

“About time a politician called out newscaster for giving a platform to those who intend to use it to spread hate and propaganda,” she wrote.

Mr Morrison joked that there were better things she could have done with an egg at a Country Women’s Association event.

The CWA wanted it known that Ms Holt was not a CWA member.

Earlier this year, Queensland senator Fraser Anning was investigated by police after he took a swing at ‘Egg Boy’ the Victorian teenager who smashed an egg on the senator’s head.

Unlike the incident in Albury with Mr Morrison, neither Senator Anning or the teenager who threw the egg was charged.

“The 17-year-old Hampton boy has been issued with an official caution in relation to the incident,” police said.

“On assessment of all the circumstances, the 69-year-old’s actions were treated as self-defence and there was no reasonable prospect of conviction.”

Then British prime minister David Cameron was egged on the 2010 election campaign trail by a 16-year-old boy wearing a hoodie.

“The first one of the campaign,” Mr Cameron noted.

His assailant, a teenage bricklayer, later wrote a letter of apology to the PM and was surprised to receive a reply.

When he was running for political office in the United States, Arnold Schwarzenegger was egged.

“This guy owes me bacon now,” he said. “You can’t have eggs without bacon.”

Former British PM Harold Wilson was also hit by an egg in the 1970s.

“If they are fighting the cost of living in Harrow, obviously eggs must be cheap enough to throw about,” he said.

Not so British deputy PM John Prescott, who responded to a 2001 egging by punching his assailant in the face.

At the time, the assailant’s girlfriend gave her first-hand account of the incident.

“Craig threw an egg at Mr Prescott, who was walking past after getting off the battle bus. Then Mr Prescott grabbed him by the scruff of the neck and thumped him,” she explained.

But a September 2017 assault of former PM Tony Abbott was no laughing matter.

DJ Astro Labe, who headbutted Mr Abbott in Hobart, was sentenced to six months in prison after pleading guilty to causing harm to a Commonwealth public official.

In October 2010 then Prime Minister John Howard had a shoe thrown at him during the ABC’s Q&A show, echoing the action of an Iraqi journalist who had thrown a shoe at US President George W Bush in 2008.

‘‘That’s for the Iraqi dead,’’ the man shouted as he threw two shoes at Mr Howard.

Another female audience also shouted: ‘‘You’ve got blood on your hands’’.

Which is probably a good reminder that an egg was actually quite tame, by comparison.