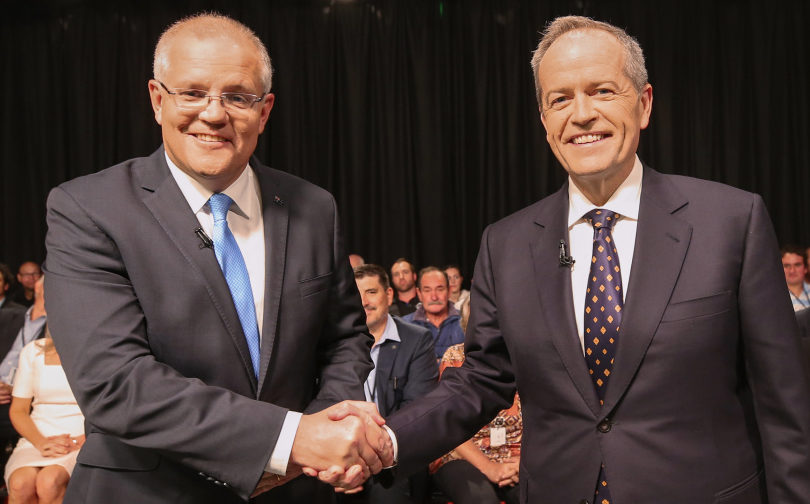 Tuesday was an eventful day, and especially for Prime Minister Scott Morrison.

The PM’s visit to Albury on the Victorian and New South Wales border started with an address to the Country Women’s Association – his second appearance in front of that crowd this campaign. Mr Morrison joked he came back for the “great scones”.

But as he was leaving, things turned sour with a female protester throwing an egg at him.

.@tomwconnell: It looks like the egg basically bounces straight off @ScottMorrisonMP. This has just happened at the Country Women's Association.

A protester thrown an egg the Prime Minister Scott Morrison at an event in Albury (it didn’t break). #auspol #ausvotes ⁦@politicsabc⁩ pic.twitter.com/7KYWbKrrun

Mr Morrison took to Twitter shortly after, taking aim at what he called “cowardly activists” and “militant unionists”.

My concern about today’s incident in Albury was for the older lady who was knocked off her feet. I helped her up and gave her a hug. Our farmers have to put up with these same idiots who are invading their farms and their homes.

Australian Council of Trade Unions secretary Sally McManus as you would imagine – took issue with the tweet.

How dare you accuse us of this & make the association. You seem to have no respect for the truth or any concern about running down your fellow Australians. We would never support such behaviour https://t.co/4N9BhKPa2E

Mr Morrison was in Albury and Wodonga before flying to Sydney.

Opposition Leader Bill Shorten was in the Victorian city of Geelong.

Liberal: Focusing on better services and job opportunities in regional communities, Mr Morrison also announced a plan to eliminate mobile phone black spots in an area larger than the size of South Australia.

Labor: The ALP vowed to put an extra $900 million into public hospitals.

“Pardon the pun, but I don’t want to over-egg this thing.”
– Mr Morrison on the egging incident

“I like people. I can’t speak for the Liberals. They always look like they’ve come from another planet and they’ve found the human race very curious at election time.”
– Mr Shorten on why he meets and greets

“We only had our launch on Sunday. The government is still trying to find some policies to launch next Sunday.”
– Labor’s Anthony Albanese on the Liberal Party’s launch

Labor dissed on WeChat:  Labor has demanded the PM rule out any involvement in fake posts spreading misinformation about Labor on Chinese social media giant WeChat.

On Tuesday afternoon Coalition spokesman Simon Birmingham told the ABC he was sure the content was not coming from the Liberal Party.

Pre-Polling: How Australians have embraced early voting. Maybe it is because many of us cringe at the idea of standing in line on May 18.

It has become so popular that one million people are expected to have voted by Tuesday night.

Prepoll votes cast in the 2019 federal election was just over 255,000 on Monday. Total prepoll is now 915,000 since early voting commenced a week ago. #ausvotes #auspol

The sheer numbers could actually spark a review of the rules.

Treasurer Josh Frydenberg said the three-week, early voting period “feels a bit long”, while Mr Shorten flagged the policy may be “reviewed after the election”.

Clive Palmer and the High Court: Mr Palmer obtained nothing from his High Court challenge that aimed to prevent the Australian Electoral Commission (AEC) from publishing results early on election night.

On Tuesday the High Court dismissed the case unanimously.

On the topic of Mr Palmer, it’s always notable when an Australian politician makes news in the US.

Usually it’s at their expense and this incident is no exception.

The video doesn’t mention Australian politics until after the two-minute mark, but it is worth the wait.

Campaign diary: Shell be right as leaders spread their message