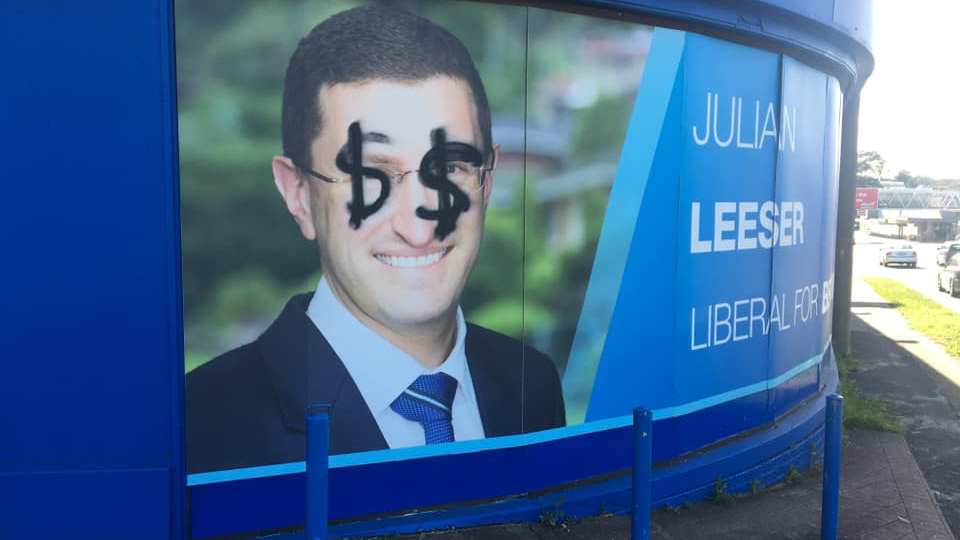 Liberal MP Julian Leeser says he has called in the Australian Federal Police after his campaign offices were defaced with anti-Semitic graffiti, in the latest incident in a growing list of assaults against candidates.

Mr Leeser, a sixth-generation Jewish Australian who has held the northern Sydney seat of Berowra since 2016, said the crude graffiti was the third such hateful incident inflicted on his campaign.

The Liberal backbencher said his election posters had previously been vandalised with “swastikas and Hitler moustaches”.

Following that, his “posters [were] torn down and repeatedly defaced by Electrical Trade Union stickers”.

“Now the photo on my campaign office – private property, not public property – has been painted over with dollar signs,” Mr Leeser wrote on Facebook.

“The $$ refer to old anti-Semitic lies of an international Jewish banking conspiracy; that Jews have control of the world’s money supply. These sentiments were used by Nazis and others who have sought to spread hatred of Jews for centuries.”

Mr Leeser said the vitriol leading into polling day is unprecedented in his 15 years of campaigning in the electorate, which was previously held by former attorney-general Philip Ruddock.

“By all means, debate and disagree with candidates because of their policies. But people should not be attacked because of something they cannot change,” he said.

Later, Mr Leeser told Sydney’s 2GB radio station that federal police had been in touch with him following an inquiry by NSW Police “on the last occasion.”

The attacks on Mr Leeser’s advertising comes after the Treasurer, and fellow Jew, Josh Frydenberg was targeted in similar attacks at the weekend.

Vandals used marker pens to draw moustaches, devil horns and the words “right-wing fascist” on the Treasurer’s posters in his Melbourne seat of Kooyong. Further Nazi imagery was painted onto a large billboard.

This latest act of vandalism in Kooyong using Nazi symbols on a billboard of mine is an insult to every victim of the Holocaust & Australian servicemen & women who fought against Nazi tyranny.

To think that this cowardly & criminal act was committed just days after Holocaust Remembrance Day shows how ignorant the perpetrators are of the horrors of history.

“This is about crimes and hate. This should have no place in our elections, absolutely no place,” he said.

Speaking to ABC’s Insiders on Sunday, Mr Frydenberg said the string of vulgar graffiti was symbolic of the “ugly hatred” that has marred the election campaign.

“[The] vandalism of my posters was not only a criminal and cowardly act, it was an insult to all the victims of the Holocaust and to every Australian serviceman and woman who served in our armed forces against tyranny,” he said.

“We need to have a debate about ideas and about people’s words and actions, but we can’t sanction or green light such intolerant views.”

Both Wentworth candidates speak out against slurs

Mr Leeser’s referral is not the first time federal election candidates have called in police about racially-charged abuse.

Independent MP Kerryn Phelps and her Liberal challenger in the Sydney seat of Wentworth, Dave Sharma, denounced false emails sent at the start of the campaign.

The emails, delivered from at least a dozen addresses, were littered with anti-Semitic messaging and falsely linked Dr Phelps with vaccination rates among Jewish communities.

The fake email blast was referred to the federal police for investigation, and followed similar material sent during the October 2018 byelection campaign in Wentworth.

“This is the sort of language that sends a chill through vulnerable communities like the Jewish community or the gay community,” Dr Phelps said.