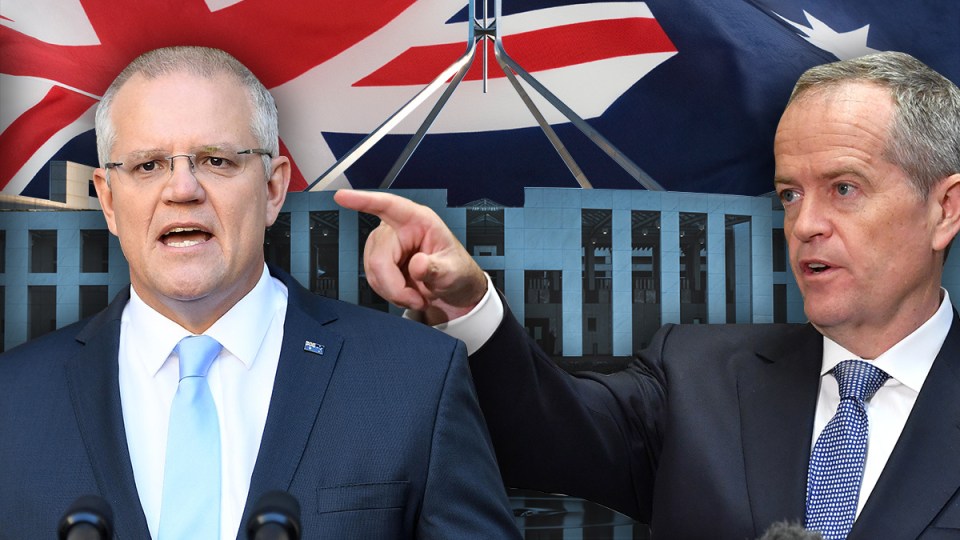 Bill Shorten has told the Prime Minister, “you’re a classic space invader”, during a leaders debate that saw Scott Morrison muscle up to the Labor leader over tax policy.

The studio audience handed a narrow second victory to the Labor leader, who won the debate by just 43 per cent to 41 per cent of an audience composed of 109 “undecided voters.” Some 16 per cent couldn’t make up their minds who won.

During the debate Mr Shorten revealed he would announce a crackdown on multinational tax avoidance on Sunday at the Labor’s campaign launch and would also release Labor’s full costings next Thursday or Friday, just a week out from the May 18 poll.

Scott Morrison smirked – again – and Bill Shorten unveiled a new go-to move of resting his chin on his hand and adopting a quizzical look when the PM was speaking.

And the debate almost had a Mark Latham “handshake moment” when Mr Morrison tried to get under the Mr Shorten’s grill onstage.

When the Prime Minister dodged the questions, Mr Shorten played Mr Squiggle and scrawled “$77 billion” on a piece of paper and held it up on television.

“Do you want me to help there?” Mr Shorten asked.

Mr Morrison shot back: “No, because I wouldn’t trust your maths in a heartbeat”

“$77 billion to the top 3 per cent of earners, that’s nice money if you can get it,” Mr Shorten responded.

As the debate continued Mr Morrison started circling his opponent.

“Where are you going?,” Mr Shorten asked playfully.

It wasn’t remotely as bad as this still shot portrays it, and the video shows Shorten actually moving towards him a little knowing Morrison was making a mistake invading his space. But the space invader line was funny and worked…. pic.twitter.com/MbrwZHrMlu

The Prime Minister accused the Opposition leader of having been shifty with a blue-collar worker who spoke to him on the hustings and wanted to know if he would get a tax cut when he earned over $200,000 a year working in the mines.

“You couldn’t look him in the eye and tell him you were going to increase his taxes,” Mr Morrison said.

“You good there, anyway?” Mr Shorten said as the Prime Minister stepped closer.

“I am just wondering. Can you look me the eye?,” Mr Morrison said.

“You’re a classic space invader,” Mr Shorten responded with a smile, prompting laughter from the audience and even getting a laugh out of the moderator, Sky News’ David Speers.

It wasn’t quite a Mark Latham-style handshake but it did spark debate on social media.

In the closing stage of the 2004 election campaign, Mark Latham and John Howard crossed paths outside an ABC studio, with the Labor leader delivering a bone-crushing handshake that Mr Howard later revealed he was expecting.

“The reason I knew it was coming was that on the night of the [election campaign] debate at Channel Nine, the cameras weren’t on us but he did the same thing to me,” Mr Howard said at the time.

“So I recall very vividly when I knew that we were going to shake hands outside that radio studio, I said to myself: ‘This bloke will do the same thing as he did at Channel Nine’. And right on cue he did.”

Accusing the Prime Minister of “talking rubbish” on the so-called ‘retirees tax’ and the cost of Labor’s climate change policy, Mr Shorten also charged the Coalition with running “a scare campaign” aimed at retirees.

.@ScottMorrisonMP on franking credits: The suggestion that these people have not paid tax… This is the money they rely on to avoid the pension.

Labor wants to change the rules which will take their income away.

“This is a lie, rubbish,” Mr Shorten said, adding that the franking-credit policy was not sustainable. “It’s not fair, Scotty.”

.@ScottMorrisonMP: We had the Ruddock review and that provided the recommendation there should be a religious discrimination act.

It would afford the same protections to people of faith as with sexuality and identity.

During the debate, a woman raised concerns that she wasn’t free to speak her mind. Mr Shorten asked what she felt she couldn’t say.

The Labor leader responded by saying he did not think women should be targeted with abuse by pro-life protestors at abortion clinics.

Mr Morrison told the female voter, “I know many Christians around the country feel exactly the way you do”.

Bill Shorten raised the prospect of allowing Australia Post to offer more competition to the big banks in regional towns, adding that such a move would not include making the local post office a bank lender.

“There’s more we could do if we looked at giving these businesses in Australia Post the ability to compete with the banks of Australia,” he said.

“Wouldn’t it be good if we could use Australia Post to provide opportunities to put more competition on banks to be able to provide services in the bank.”

“I don’t know if we really need to become a full bank in all honesty,” Ms Holgate said.

“But there is a need for us to perhaps do what we do and do more to help the banks.

“I think the closure of many banks in small communities certainly creates the need for Australia Post to serve those communities, but it’s not really critical that we become a bank.”