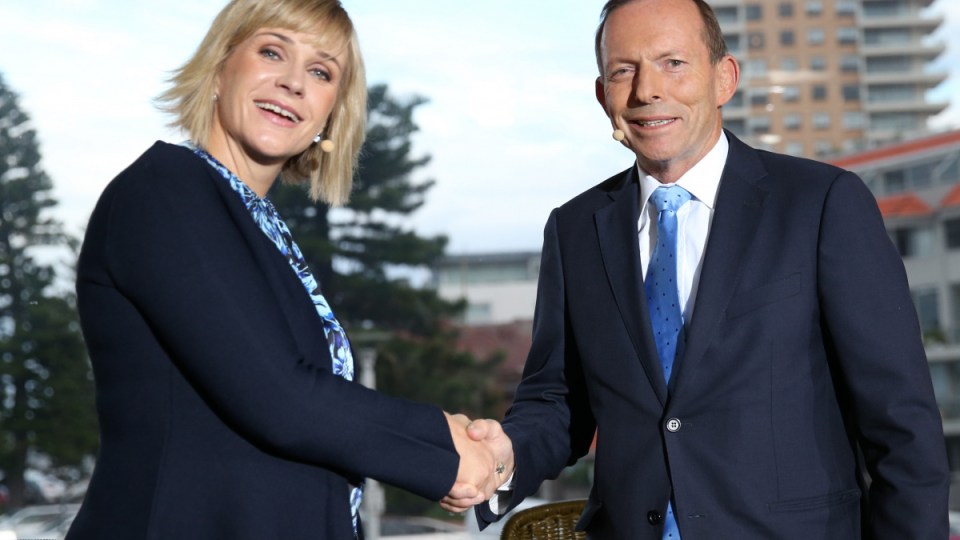 Tony Abbott has raised the prospect of restarting car-making in Australia – less than six years after he oversaw the effective shutdown of the nation’s automotive industry.

The comments came as a debate between the former prime minister and hustings rival, Independent Zali Steggall, saw jeers and boos erupt at a surf club in Queenscliff, New South Wales, in response to passionate arguments from both candidates.

The 25-year MHR for Warringah seemed to be the crowd’s favourite, though it’s worth mentioning the venue was the local lifesaving club where he has volunteered for decades. By debate’s end, the crowd was even cheering “Tony, Tony, Tony”.

Super weird chanting and dress ups at the Warringah leaders debate at Queenscliff Beach… but at least they’re passionate. pic.twitter.com/bdEpN3i64o

From the beginning, Mr Abbott was by far the more polished orator, though he did slip up when wrongly telling the audience that Labor had a plan for 50 per cent of all cars on Australian roads to be electric by 2030 (in fact, Labor wants to aim for half of all new cars sold to be electric).

But asked what would happen if overseas car makers started focusing on electric vehicles and Australia did not have the infrastructure to support EVs, he said: “We may very well re-create our own car industry.”

“If we need them we will make them,” Mr Abbott said. That remark had the debate audience laughing.

Sky News moderator David Speers challenged Mr Abbott, asking if he regretted not doing more to save the local car manufacturing industry during his time as PM, when Ford, Toyota and GM Holden ended their local operations.

“No I don’t, because what I said at the time is that ‘I’m not going to chase GM and Toyota down the road waving a chequebook’,” Mr Abbott said.

“Now the crazy thing is that the government gave up subsidising Australian-made cars that the ordinary people drove, and now the government, or people like Zali, and Bill Shorten, want us to subsidise expensive imported cars that only rich people want to drive.”

The environment became a regular theme and stoked fire in the debate, with Ms Steggall saying it was no surprise that, of both major parties’ policies, she leaned more toward Labor’s because the Coalition’s agenda was to take “no action”.

When a questioner asked the candidates how they reduced their personal carbon footprints, Ms Steggall said she was looking into solar panels and, while she didn’t support Labor’s electric car target, she was considering electric car options. Trouble is, though, there are no models she regards as suitable for her large family.

Mr Abbott, meanwhile, joked about driving a car that is 20 years old, adding that Australians should get to choose which cars they drive, not the government.

Ms Steggall declared early on that climate change was the most pressing issue, telling the crowd they only had “10 to 15” years to act before environmental catastrophe ensued.

“The science is in, the facts are there … we can’t be the generation that fails to act,” she said.

It was just one of many moments drawing enthusiasm from the audience, which was far more vocal than the typical debate crowd.

At one point there were calls from the seats for a woman to take the microphone, after it was noted loudly that all of the questioners had been men.

As Mr Abbott used the night to hone his pitch, the theme turned to parish-pump issues for Warringah residents: the Warringah Tunnel to ease traffic congestion and keeping cost of living low.

“The best thing the government can do to improve the lives of people here is build the tunnel,” he said.

Ms Steggall threw her support behind the project, saying she was “100 per cent” for its completion.

Both also agreed on the need to stop Labor’s franking credits and negative gearing.

But Ms Steggall seemed unable to make up her mind on where she would land in the event of a hung parliament. At one stage she said she would not support the Coalition due to its shortcomings on climate, but on another occasion suggested she could not support Labor based on their suite of policies.

A low moment for Mr Abbott came when the debate turned to same sex marriage. Ms Steggall accused Mr Abbott of abandoning his electorate by not voting in favour of it.

Mr Abbott said he “respected the electorate of Warringah” by walking out, and not voting against it.

.@zalisteggall: Same sex marriage plebiscite is a mobilising issue in Warringah. The electorate felt absolutely abandoned by @TonyAbbottMHR. It was so disrespectful to see our elected member walk out of parliament.

Warringah debate: Tony Abbott and Zali Steggall duke it out on climate and cars to jeers and cheers