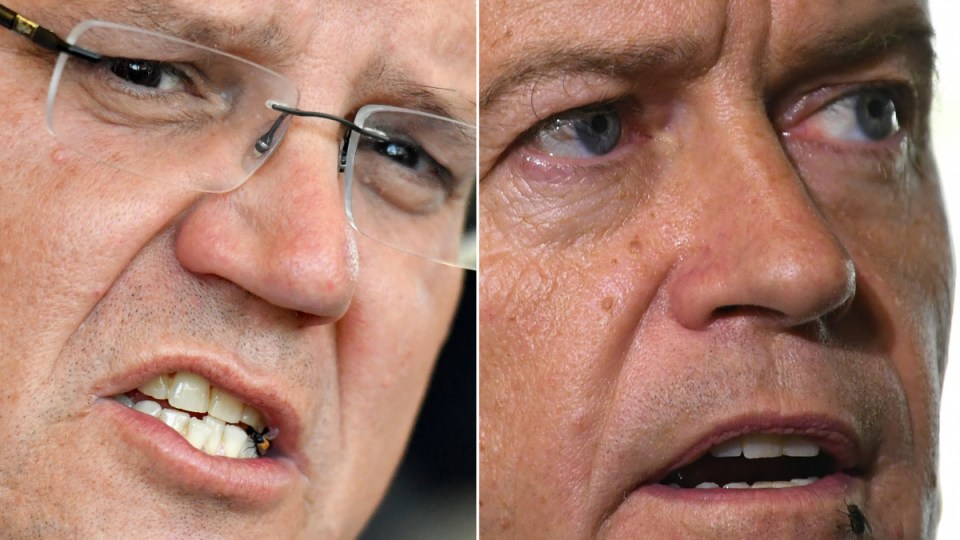 The leaders remained in Western Australia on Tuesday. Photo: AAP

Another day and another candidate in doubt.

This time it was another Liberal, Tasmanian candidate Jessica Whelan, who came under fire for reportedly making Islamophobic comments on social media.

Ms Whelan denied ever making the posts, and has requested an investigation while a party spokesperson suggested that some of the comments may have been ‘digitally manipulated’.

Then things got a little awkward. The PM attended Tasmania’s agricultural festival where Ms Whelan was present.

In a series of photos snapped by the press, Mr Morrison appeared quick to avoid being caught in the frame with the candidate for Lyons.

PM’s near miss with his Lyons candidate who is in strife over social media posts pic.twitter.com/2cT6hvXcag

Meanwhile, the Labor Party was accused of hypocrisy for continuing to endorse Melbourne candidate Luke Creasey, who on Wednesday was found to have shared a rape joke on social media in 2012.

Prime Minister Scott Morrison and Labor leader Bill Shorten were both in northern Tasmania on Thursday where they attended an agriculture show near Launceston.

The party also announced a $60 million budget measure that aims to make it easier for exporters to market their products overseas.

It was also busy condemning Labor’s climate policies, but failed to announce any of its own climate ideas.

Labor: The ALP announced a $75 million renewables policy, but all of that was overshadowed by the analysis that emerged costing Labor’s climate policy. Mr Shorten called the whole thing a scare campaign. More on that below.

Most of the memorable ones were a variation on a theme…

“I’ve got to say a lot of the policies that I have heard of, from the Labor Party and from independents who want to go to further, is, it’s socialism masquerading as environmentalism.”
– Former prime minister Tony Abbott on Labor’s climate agenda

“The only person, frankly, who’s trying to sell a pair of jousting sticks to the Australian people at this election is Bill Shorten.”
– Mr Morrison references the movie The Castle to make a point about Labor’s climate policy

“This fellow and his report remind me of the doctors that big tobacco companies used to roll out in the ’70s and ’80s to say that smoking was healthy for you.”
– Mr Shorten on BAEconomics’ costing of Labor’s climate change policy

Elsewhere on the campaign trail:

Warringha debate: Tony Abbott faced off with rival independent Zali Steggall in a televised debate on Thursday. Ms Steggall pitched herself strongly and said climate change was her No.1 priority.

When all was said and done, Mr Abbott seemed to woo the audience just a bit more. Then again, he has been in the game a lot longer – and the debate was at the surf club, where he has volunteered for years.

Tony Abbott’s campaign posters targeted: The former PM had said the campaign had reached a “new level of nastiness” after one of his posters was plastered with the word “Pell” over it – referring to his relationship with Cardinal George Pell, who was convicted of child sexual abuse.

The PM featured in perfect detail on a personalised wood carving.

The timber portrait, completed by a local woodturner, Bob Brinkman, was presented to the visiting prime minister at Agfest (Agiculture Festival) in Tasmania by Senator Eric Abetz.

Eric Abetz has prevented the PM with a personalised wood carving pic.twitter.com/uww6ZExUTi