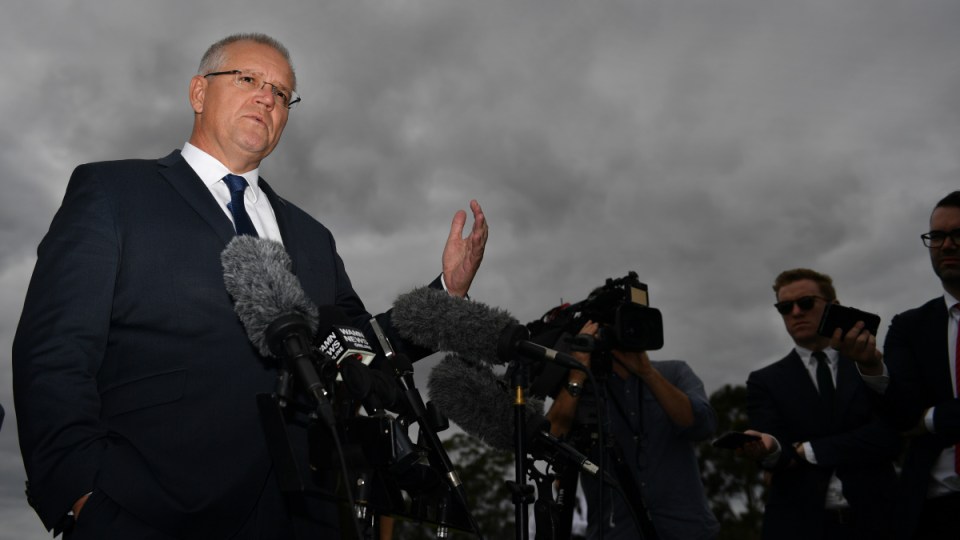 If we could say anything about Day 21, it’s that it had little to do with policy and more to do with candidate chaos.

The Liberal Party saw two of its members fall on Wednesday.

Peter Killin resigned after his anti-gay comments surfaced online and Jeremy Hearn was disendorsed by the party after making outlandish anti-Muslim statements.

But a shadow soon befell Labor, when its candidate for Melbourne Luke Creasey was found to have shared a rape joke on social media in 2012.

Among the debris though, some other political news …

No doubt one of the highlights for Mr Morrison was a visit to a group of Liberal devotees, where one retiree asked him to “nail the bastard” (we assume that would be Mr Shorten) in the three weeks left of the campaign.

Mr Shorten was at Somerton in South Australia making a renewables announcement. It didn’t last long before veering into Hearn territory.

But true to form, much of the day was focused on costing Labor’s policies. He dismissed claims the 45 per cent emission reduction plan can’t be costed, insisting it will ultimately come from the taxpayer.

He pledged $1.5 billion over 10 years to combat housing shortages and chronic overcrowding.

He also unveiled plans for a renewable energy zone in the state’s Spencer Gulf region.

“What you have before you is a choice between Bill’s stable and united team and a coalition of creeps, crackpots and cranks.”
– Labor deputy leader Tanya Plibersek

“If the party has a female problem, then I don’t think the numbers stack up against that argument.”
– Nationals leader Michael McCormack, who has two women in his 22-member party room

“The thing I notice about Bill, as he keeps dropping his notes on this campaign, is the more desperate he gets, the more outrageous the claims.”
– Mr Morrison on Mr Shorten’s comments about the Liberals getting cosy with right-wing extremists

“No coalition with the Greens. Sorry, Richard, it’s not happening.”
– Mr Shorten on whether Labor and the Greens would team up on climate policy

Greens candidate resolute: A South Australian Greens candidate and Ngarrindjeri elder Major ‘Moogy’ Sumner said he was disappointed after his posters were vandalised with racial slurs.

Mr Sumner said it would not deter him and that Australia needed First Australians in Parliament.

Penny Wong on foreign policy: Penny Wong made the only substantial foreign policy address of the campaign so far. Speaking at the Lowy Institute in Sydney, Senator Wong said Australia’s relationship with China needs to be a priority.

🎧 @SenatorWong at the @LowyInstitute today on what a Labor Government would mean for Australia’s international engagement. Listen here: https://t.co/xfk5TxBACI pic.twitter.com/usJjj0YiXZ

She also said that as Australia’s first foreign minister of Asian heritage, she would project a more nuanced, multicultural image for Australia abroad.

And after a day full of low moments, that sentiment lifted the political tone considerably.