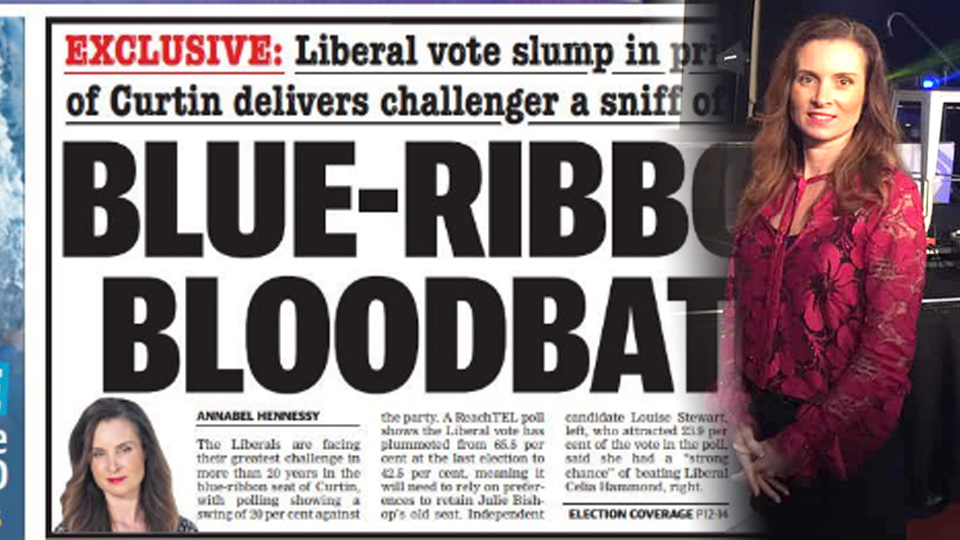 Malcolm Turnbull’s son Alex has been dragged into a fake polling scandal, accusing conservatives of impersonating him in emails to a WA independent candidate.

The former prime minister’s son has angered conservatives by bankrolling the campaigns of independent candidates.

He has also commissioned and bankrolled polling for independents, including former Liberal Julia Banks.

However, Alex Turnbull is now concerned his name is being used to promote fake polling data.

The independent candidate for Curtin, Louise Stewart, believed an email she received from “Independents Inc”, claiming to have ReachTEL/UComms polling, was legitimate.

Fight on for Liberals after vote slump in prized seat of Curtin, behind the scenes with family man David Mundy before the Dockers' milestone 300th game, and the great white caught in our new SMART drum-lines. All this and more in today's The Weekend West. pic.twitter.com/IroWtXL2Ch

The ‘poll’, which suggested Ms Stewart could win the seat previously held by Julie Bishop, was splashed across the front page of Saturday’s West Australian before ReachTEL revealed it as fake.

“They are committing fraud on UComms, right. And then someone is also impersonating me.

“[Ms Stewart] didn’t have my number. Because we had literally never spoken, it took a couple of days to work out what the hell is going on here.

“I spoke to her at the weekend. She said, ‘We got this email from ‘Independents Inc’. I said to her ‘that doesn’t exist’. There is not an umbrella organisation. This is crazy.”

Speaking from Singapore, Mr Turnbull said he now believed the email impersonated him, suggesting he had commissioned the polling to provide to Ms Stewart.

“First, I got a call from someone in UComms/ReachTel saying, ‘Are you faking polls? What’s going on? You’re a customer of ours’.

“I did not register that domain, I have nothing to do with it. And he’s like ‘Sh-t, it’s Liberal Party astro-turfing then’.

“He just immediately hung up on me. They are having kittens.”

The definition of “astro-turfing” includes using fake grassroots organisations to influence public opinion. Such organisations might also use software to mask their identity.

Ms Stewart told The New Daily via text message that she believes she was the subject of a dirty tricks campaign.

“It is definitely a hoax targeting me and my campaign. We don’t know who is behind it,” she said.

Asked if she planned to refer the matter to police, Ms Stewart said: “I’m sorry I can’t give you anything further at the moment.”

ReachTEL founder and UComms co-owner James Stewart has confirmed his company has not done Curtin-specific research during the election campaign.

Mr Turnbull said he had sent an email to the address on the polling information before it was shut down.

The network communication tool indicated it was “very close” to an MP’s office.

The New Daily has chosen not to name the MP.

Finance Minister Mathias Cormann told The West Australian on Monday that Ms Stewart needed to explain her involvement in the fake poll.

“The independent candidate must fully disclose her involvement in this deception. If she can’t she should pull out,” he said.

Earlier, Ms Stewart told the newspaper she had been supplied the poll by a third party but declined to say who it was.

“The campaign was supplied with polling data from a third party, the results of which matched our experience on the ground in Curtin,” she said.