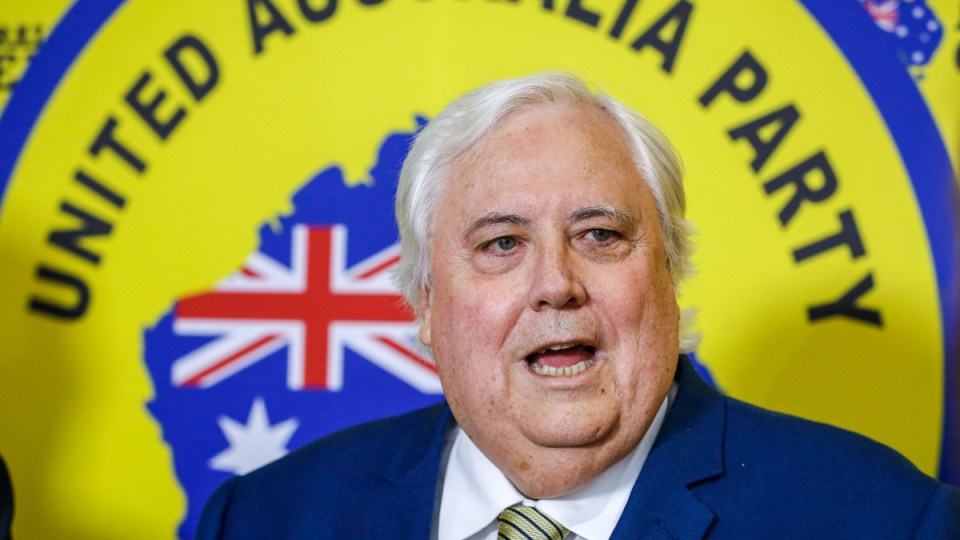 A rise in support for Clive Palmer's United Australia Party could be a game changer. Photo: AAP
analysis

Clive Palmer is being hailed in some quarters as a political saviour for Prime Minister Scott Morrison.

Her support went into free fall over the guns-for-cash documentary How to Market A Massacre.

Now, Mr Palmer could deliver vital votes to the Liberal Party under a preference deal in Queensland, Victoria and Western Australia.

Mr Morrison wouldn’t even have to get his hands dirty with One Nation. Needless to say, Pauline Hanson is not impressed.

But Mr Palmer’s political resurrection holds grave risks for both sides of politics.

Standing in a hot shed in Darwin on the eve of Anzac Day, those risks emerged in the form of a blunt question to the Prime Minister.

“But Prime Minister, you know Clive Palmer is spiv though, don’t you?”

It was a question that was described as “inaudible” and left off the official transcript.

It would appear the Liberal Party’s new politeness to Mr Palmer extends beyond simply forgiving him for once comparing Mr Morrison to the Nazis.

“I’m not going to get into personality of these things,” the Prime Minister replied to the “inaudible” question.

The journalist added (also labelled inaudible in the transcript) “but his work practices?”.

“No. I’m not going to get into personal commentaries,” Mr Morrison replied.

It was time to move on. The Prime Minister ignored several more questions on the sacked workers’ entitlements and instead moved to taking another on Labor’s climate change policy.

Some $7 million in entitlements are still owed to Mr Palmer’s employees of his Townsville-based nickel refinery, which went into liquidation in 2016, leaving 800 people unemployed.

There’s one big reason to sense danger.  A preference deal with Mr Palmer would enhance the Labor Party’s campaign over penalty rates and the Liberals support for “the big end of town”.

If Mr Morrison makes a deal with Mr Palmer he will also own the issue of the workers at the nickel refinery that he ripped off.

This month he vowed to pay the workers. He claims he will do that after the election.

For the Labor Party, the danger is that if it wins, the return of a bloc of Mr Palmer’s senators scuttles negative gearing reforms and dividend imputation credits.

Now, there are some who argue this could be a blessing.

Why does that matter? The tax increases are how Bill Shorten is funding key election promises on health and education.

Back in 2013, when Mr Palmer burst onto the political stage, he was a King Kong left to run rampage in the Senate, blocking the Abbott government agenda to cut the debt and deficit.

The danger for the “winners” on election night is they could face the same challenge.

For now, Mr Morrison is back to his old argument that preference deals are something dealt with by the party machine.

“The party organisation will make any further comment about that. It’s not something I have any direct involvement with,” the Prime Minister said.

Of course, that wasn’t what he was saying just weeks ago when he ruled out a preference deal with Pauline Hanson after the Christchurch massacre and the US gun lobby visit.

The election race remains tight. To understand how tight, remember that the next Parliament will have 151 MPs.

To win government and provide a Speaker, the Labor Party needs to win 77 seats.

Most Labor MPs who spoke to The New Daily think they are on track to win no more than 78 to 80 seats.

The Liberal Party’s hope is they could lose seats in Victoria but gain some in Tasmania, the Northern Territory and even NSW including Emma Husar’s old seat of Lindsay. Enough to hang on or at the least a very respectable loss.

But Labor isn’t buying the Liberals’ claims they could pick up three seats in Tasmania or stage a miracle in Sarah Henderson’s Victorian seat of Corangamite.

Labor thinks perhaps one seat is in play in Tasmania, but Dunkley and Corangamite will fall – and possibly Chisholm too.

They believe Health Minister Greg Hunt could be in real strife in Flinders, where independent Julia Banks could split the conservative vote and hand the seat to Labor.

If Mr Morrison does the preference deal with Clive Palmer there are still upsides for the Labor Party.

It will have to hit back on Mr Palmer’s record of refusing to pay workers’ entitlements and it won’t waste time doing it.