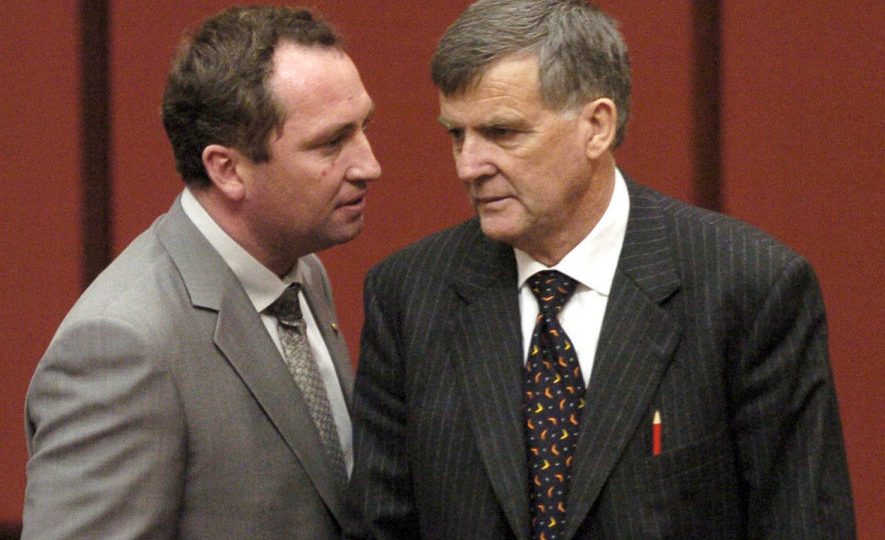 Barnaby Joyce and Bill Heffernan together in the Senate. Photo: AAP

For years, former senator Bill Heffernan was a lone voice in the Liberal Party, warning big water buybacks by taxpayers were “a fairytale” a “con job” and “a fraud” and “cooking the books”.

Now, as controversy swirls about the $80 million deal that then water minister Barnaby Joyce signed off on two years ago, the maverick former politician is warning that both sides of politics need to quit playing games and work together to avoid a calamity.

Mr Heffernan, a Junee farmer, does not believe water licences should have ever been issued to the two Queensland farms – Clyde and Kia Ora – at the centre of the latest controversy.

“The chooks are coming home to roost,” he told The New Daily.

His principle objection is that the water involves overland flows – water that depends on rainfall and flooding.

“Where do you think the water is stored?” he said.

“It’s in the clouds. It doesn’t exist. So how can you sell a licence? It exists when you have a storm or a flood.

“This particular deal, the Queensland government should never have issued the water licences.”

Mr Heffernan’s criticism applies across the board – to Liberal and Labor ministers.

“There’s been a series of blunders, because of the lack of dirt under the fingernails by various ministers,” he said.

Mr Heffernan, who retired from Parliament in 2016, has never been afraid to challenge the status quo.

He once brandished a fake pipe bomb in a Senate committee to prove the building was no longer secure.

On just another day in the office, he also got into hot water for bringing an 18-centimetre knife into Parliament House.

Seven years ago, he broke with the Liberal Party and abstained from voting on the Murray-Darling Basin plan.

Mr Heffernan said at the time that “the science is warning us. If the prediction of the science is 40 per cent right, the only water that will be reliably available in the Murray-Darling basin will be the environmental flows for the fish and high-security water”.

“I voted against the plan when it was in the Senate. I told them, as they were voting, they they were making a grave error. They didn’t take into account what the science was saying about the future,” he told The New Daily.

“The buying of supplementary water, and expecting you can allocate it is fairyland stuff. And it’s going to take co-operation from all sides to fix the problem.

“To think somehow majestically and magically, if you let people harvest the flood waters coming out of the floodplain will it get to the lake?

“Of course it bloody well won’t.

“To buy that water back thinking you can allocate it to the environment, it’s dreamtime stuff.”

As chair of the Senate Inquiry into Murray-Darling Basin management, Mr Heffernan also protested against a NSW and Commonwealth offer to buy back water from irrigators on the Nimmie-Caira floodplain, between Hay and Balranald in south-west NSW.

“We’re actually buying some of this water, which is floodwater, from a floodplain, where it’s going to go back down the same floodplain in a flood to somehow return it to the environment?” he said.

Eastern Australia Agriculture, the company that owned the Kia Ora and Clyde farms when the water rights were sold, was set up 2007 by Liberal frontbencher Angus Taylor, who worked in investment banking for companies, including Port Jackson Partners.

Mr Taylor quit his involvement in the business when he entered politics. He has said he had no involvement in sale of the water and did not make any profit from it. Nor did his family.

Senior government sources have told The New Daily that Australia’s sovereign wealth fund, the Future Fund, may have “indirectly” benefits because it invests with Pacific Alliance that invested in EAA.

The Agriculture Department has defended the sale.

“Eastern Agriculture? I don’t know who they are. They are not breaking the law these fellas, they’ve just outsmarted it,” he said.

“I don’t think Taylor has got anything to do with it. He was just in business doing business.

“They saw an opportunity and cashed in on it. You send your profits to the tax haven and your bills to other place.”

On Tuesday, the Water Minister David Littleproud referred the matter to the Auditor-General. He has asked that the investigation also include the years when Labor presided over the Murray-Darling Basin.

“I don’t think there’s any need for a royal commission. I think governments of all persuasions have got a huge problem with the Murray-Darling Basin because when they issued the plan they took no consideration of what the science was saying the future would hold,” Mr Heffernan said.

“It’s going to take an enormous effort to get this right.

“There are people who have bought the licences with goodwill and hard cash which, in some instances, is not going to work out.

“It’s all a bit of worry. The greatest challenge facing the human planet is going to be feeding itself.

“They’ve got a calamity coming.”