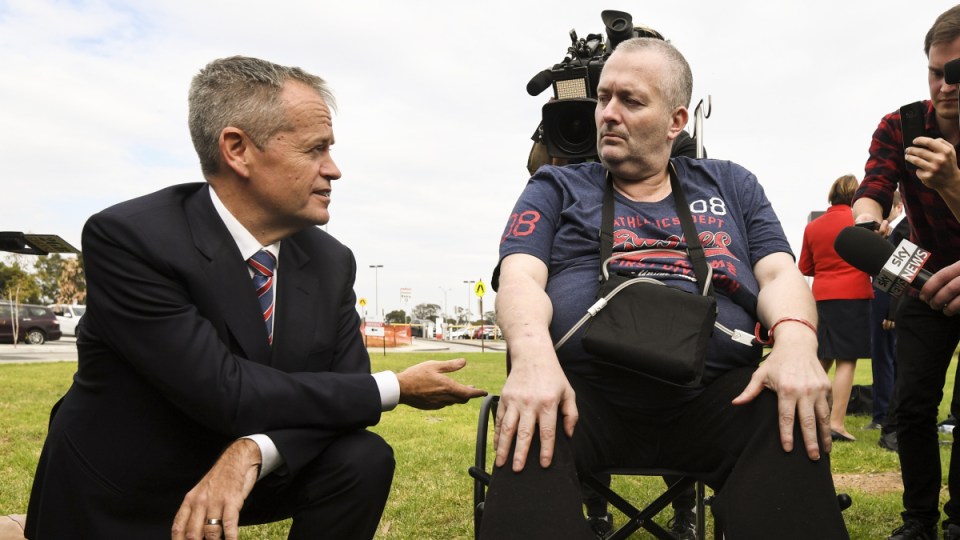 A volunteer firefighter battling cancer has confronted Bill Shorten on the campaign trail, asking why he should trust the Opposition Leader’s big promises when he had been let down by Labor in the past.

Robert Gibbs, who is in a wheelchair due to his battle with leukaemia, tackled Mr Shorten at a media conference in the battleground Victorian seat of La Trobe on Monday.

“How are we supposed to believe your potential government, when [Victorian Premier Daniel] Andrews has done nothing but make my life hard and of other people, volunteers, with cancer?” Mr Gibbs said.

“I’ve spent the last four years in and out of hospital – that long that my daughter is worried that is her dad ever going to come home. I have a six-year-old daughter.”

Mr Shorten praised the travelling media for allowing Mr Gibbs to ask his question. He said he would talk to Mr Gibbs after the media conference.

“I want to understand what has happened,” he said.

“I can pass on your disappointment to him but I can’t speak for [Mr Andrews]. I haven’t been prime minister in the last four years but if I am prime minister I do want to reduce your out-of-pocket costs.

“If you’ve had a very fortunate experience, everything’s been free, that’s great. But I can tell by the shaking of your head that that’s not what happened.”

Mr Shorten apologised for what Mr Gibbs had gone through, and said he wanted to do better.

“You have a six-year-old daughter, a volunteer, you’re in the battle of your life – that’s life. What I can say to you is we’ll fund six million extra scans. We will fund three million extra visits to the specialists. We will put an extra $125 million into cancer research,” he said.

“What you’re talking about is the exact reason why I’m running for prime minister.”

On Monday, Health Minister Greg Hunt accused Labor of “a con” for its promise to return $2.8 billion in hospital funding, because it has stopped short of guaranteeing it will match state funding.

“He’s offering the states a new health agreement, claiming it will increase funding to 50-50,” he said.

“But he’s gone and spent the money. It’s another health hoax from Labor and this time it’s the states who are being conned.”

Mr Hunt has also accused Labor of a funding black hole in its “free” cancer treatment promise because it ignores 421 Medicare items that already relate to cancer.

It came as the latest Newspoll confirmed Labor was maintaining an election-winning lead of 52 to 48 per cent on a two-party preferred basis,

The Newspoll result would translate into the loss of 10 seats for the Coalition and the election of a Shorten government.

But there are worrying signs for Labor that Scott Morrison is lifting the Coalition’s primary vote. It is up three points in the past month alone, to 39 per cent, and remains the key trend political strategists look for when analysing Newspoll.

Labor is also directly linking new health spending to increased taxes to make the case for controversial reforms, including negative gearing and changes to cash refunds for franking credits.

“Procedures such as knee and hip replacements or cataract surgeries aren’t elective – they are essential,” Mr Shorten said.

While in Launceston, Mr Morrison said last Wednesday that more than $34 million would be invested to provide an extra 6000 surgeries and endoscopies across the state, as well as primary care support to rural patients.

Mr Shorten pledged to “put back every single dollar that the Liberals have cut from public hospitals”.

But there’s one big difference between the policy Labor is rolling out at this election compared to the ALP’s original policy under Julia Gillard.

Labor has stopped short of committing to a 50:50 funding deal with the states, which was designed to stop cost-shifting and ensure that if the states increased hospital funding the Commonwealth would follow suit.

“Despite the desperate attempts from Bill Shorten to run another Medi-hospital scare campaign, the facts on hospital funding are clear and show record funding each year, every year under the Coalition,” Mr Hunt said.

“The new national hospitals agreement will provide an additional $31 billion in public hospital funding from 2020-21 to 2024-25, taking overall funding during this period to $131 billion.”

With a stronger economy we’re headed in the right direction. Last year, for the first time in history, more than 100,000 young Australians got a job. Our new commitment means 1 in 5 of the new jobs we pledge to create over next 5 years will be for young people #BuildingOurEconomy pic.twitter.com/MIWHZ3jkla

Home Affairs Minister Peter Dutton apologised – again – on Sunday for accusing his Labor opponent Ali France of using her disability as “an excuse” not to move her family into the electorate.

Ms France had her leg amputated after she was hit by a car protecting her toddler in a pram in 2011. She spent a compensation payout upgrading her home, which is seven minutes from the electorate.

After making “excuse” comments to The Australian newspaper on Friday, Mr Dutton was backed by Mr Morrison. He then doubled down on the comments later in the day, suggesting Ms France was more interested in the “inner-city lifestyle” than moving into the electorate.

“I made comment yesterday obviously in relation to it. I regret having said the words I said,” Mr Dutton told reporters at an LNP rally in Brisbane on Sunday,

“Now the focus, as the Prime Minister said, in this campaign is making sure we can manage the economy well and pay for the services we need.”

Mr Morrison said on Friday Mr Dutton’s comments had been taken “out of context”.

But The Australian newspaper reported that the issue of Ms France’s failure to live in the electorate was first raised with the newspaper by a spokesman for Mr Dutton, before the Home Affairs Minister followed up with on-the-record comments during an interview.

I apologise to Ms France for my comments yesterday. My argument with the Labor candidate is about how our respective policies would affect the people of Dickson.