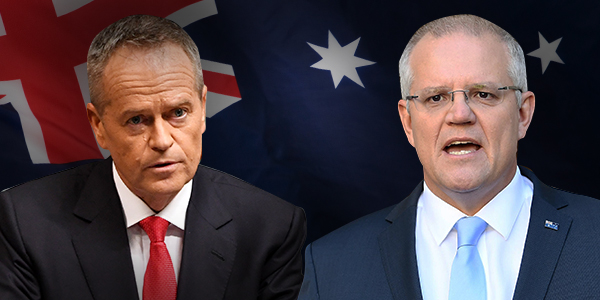 The “miserable ghosts” of prime ministers past are continuing to haunt Scott Morrison’s campaign with Tony Abbott declaring the current government is “better” than the Malcolm Turnbull era.

Tony Abbott implied Mr Turnbull’s government was out of touch on the first day of the campaign as he accused Bill Shorten of trying to “take people’s car off them.”

“We are more in touch with middle Australia than we were.”

When Mr Turnbull’s own criticism of Mr Abbott as a “miserable ghost” was raised, Mr Abbott offered a cheeky response.

Mr Abbott is facing a tough fight in the blue-ribbon seat of Warringah against independent candidate Zali Steggall insisting he will be outspent by activists Get Up! and unions.

“(Bill Shorten) will shred your inheritance with his removal of franking credits. He will make your house worth less,” Mr Abbott said.

“He will take your car off you because he doesn’t want anyone to drive a car that’s not electric.”

That was enough to prompt 2GB broadcaster Ben Fordham to intervene.

“Hang on, hang on. He’s not going to be a car thief and steal people’s car,” he said.

Earlier, the Liberals campaign spokesman Simon Birmingham dodged questions over whether Mr Turnbull will play any formal role in the campaign.

“We will welcome every volunteer who wants to come out and campaign for us but I think the Australian people want this election campaign to be fought about their future,” Mr Birmingham said.

“We’ll obviously highlight the achievements and the track record of the government but also our plans for the future.”

Mr Shorten launched his campaign in the seat of Deakin in Victoria urging voters  to end the chaos of the Abbott-Turnbull-Morrison government.

“That’s what Australians want – one prime minister for three years, not a revolving door. This election is very straightforward,” Mr Shorten said.

Prime Minister Scott Morrison billed the contest as a personal one.

“At the end of the day, it is a choice between whether Bill Shorten should become the Prime Minister or I should remain,” he told Channel Ten.

“My Government has been leading a policy platform which has been making our economy stronger, which means we can guarantee the funding for essential services like hospitals, schools and Medicare.

“What we are saying to Australians as they go to the polls on May 18 is that we need to keep our economy heading in the right direction. We spent the last five and a half years cleaning up the mess Labor made with the Budget.”

Mr Morrison confirmed he called the May 18 election on a Thursday to avoid some logistical issues involving public holidays.

“Because of a number of public holidays that fall over the campaign period, for important issues like close of nominations and close of rolls we had to call the election a few days earlier than normal to ensure there wasn’t any uncertainty about the rollout of the formal part of the electoral process,” he said.

Mr Morrison was also asked why he had not mentioned climate change when he announced the election on Thursday morning.

“There’s independent modelling that it will cost $9000 a year on their wages and if he won’t tell you what it means, you shouldn’t vote for him.”

Day one dramas: The fight for votes begins